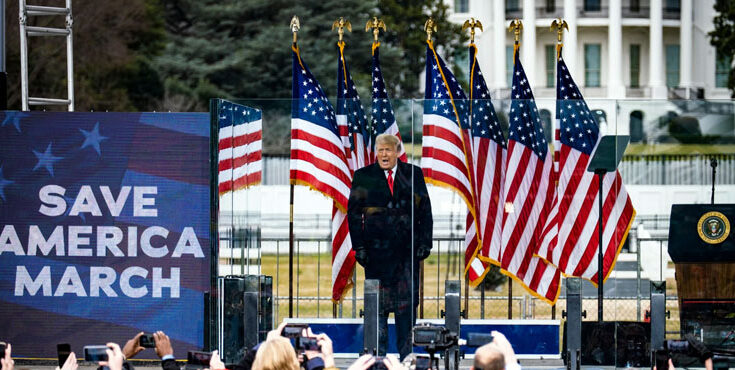 Video still: Trump spoke for about an hour to a crowd of supporters prior to the march on the Capitol.

President Trump’s second impeachment by the Democrats is a preview of coming attractions.  By controlling both houses of Congress, as well as the presidency, the Dems are virtually unrestrained in doing whatever they wish and promoting whatever shenanigans their members may dream up.

To make certain their antics are totally unimpeded, an increase in hand-picked Supreme Court Justices – referred to as “packing the court” – will probably become an eventual reality.  With the legislature, presidency, and judiciary firmly in the Dems clutches, their socialistic agenda will have little difficulty being enacted or bridled by a compliant court.

Think this isn’t possible?  Think again.  With only a week remaining in President Trump’s “Lame Duck” term, Speaker of the House of Representatives, Nancy Pelosi (CA-D), quickly managed to rally her members into voting to impeach Trump a second time; an accomplishment never tried or been done before.

Normally, Congress seems to move at a snail’s pace, but when it comes to impeaching President Trump, they suddenly accelerate to warp speed.

To successfully guarantee the trick would work, no evidence, or witnesses, or hearings were conducted.  Just a single allegation of “Incitement of Insurrection” was voted upon and approved – in less than a day.  Supposedly, Trump’s speech at his Washington rally on Jan. 6, 2021, incited a riot.  At least according to Nancy and her obedient acolytes.

Interestingly, Pelosi called Trump a threat to “liberty, self-government and the rule of law.”

Really, Nancy?  This gibberish coming from a longtime Democrat congressional member who just rammed through another bogus impeachment proceeding without even permitting evidence of an alleged crime to be presented.

Reminiscent of accepting the old fable a “Grand jury could indict a ham sandwich.”

Of course, a large percentage of citizens are not buying Nancy’s convoluted excuses, any more than they believed the 2020 election was on the level, or that the coronavirus was a justifiable reason to lock down the country and nearly wreck the economy.  The people have been lied to and deceived for so long that the public opinion of Congress and politicians is at new lows.

Hillary Clinton once referred to Trump supporters as a “basket of deplorables.”  Then “despicable” was added to the list.  After the Jan. 6, 2021, Capitol Hill riots, “racists” and “Trump’s terrorists” became the latest slam.  Not surprising, since Trump has often been compared to Hitler throughout his term in office.

Like Trump’s failed first impeachment more than a year ago, just because Nancy and her minions managed to successfully concoct another last-minute impeachment proceeding certainly doesn’t mean Trump will be found guilty of the charge.  A Senate trial requires two-thirds (67) of the 100 members to convict.  Democrats and Republicans are evenly divided, meaning at least 17 Republicans would have to join all 50 Democrats to permanently oust Trump.

Plus, in a real trial, accusers, evidence, and witness testimony is lawfully required.  Nancy’s personal opinions of Trump has no standing in a court of law.

There is also the issue if the case can be constitutionally brought to trial since Trump will have returned to private citizen status and no longer in the White House.  What would be the point of conducting Senate hearings and trial of a former president whose mandated punishment is removal from office?  (U.S. Constitution, Art. 1, Sec 3, Par. 7).  He has already been removed by the election.

Only one.  Democrat minds have become paralyzed with hatred – they will try anything to avenge his 2016 victory over Hillary and prevent Trump from ever again seeking the presidency.  If there should actually be a trial and Trump found guilty of the insurrection allegation, he could be permanently barred from holding a U.S. government job.  A 2024 presidential campaign would be off-limits to him with no process of appeal.

In my opinion, this is the Dems single purpose in bringing a second impeachment charade.  Since he made fools of the 2016 election experts and media pundits – who nearly unanimously proclaimed he didn’t have a chance of winning the presidency – they’ve been suffering “Trump Derangement Syndrome” ever since.  Actually, their condition appears to be worsening the more they denounce him.

But they don’t have a very good batting average.  They’ve struck out every time they’ve tried to ensnare Trump in one thing or another, so why do they think their latest efforts will end any differently?  Especially since they are using some of the same old unimaginative knot heads to set the trap.

However, within the past few days, information has become available that the Capitol melee was preplanned and organized by radical members of certain leftists’ organizations; some involved in last summer’s destructive riots.  Many arrests have already taken place.

Believe it or not, CNN – certainly no friend of Trump – commented on Jan. 14, 2021, that “Evidence uncovered so far, including weapons and tactics seen on surveillance video, suggests a level of planning that has led investigators to believe the attack on the U.S. Capitol was not just a protest that spiraled out of control, a federal law enforcement official says.”

The article goes on to report “Among the evidence the FBI is examining are indications that some participants at the Trump rally at the Ellipse, outside the White House, left the event early, perhaps to retrieve items to be used in the assault on the Capitol.”

Washington D.C. U.S.  Attorney Michael Sherwin remarked “We’re looking at everything: money, travel records.  Looking at disposition, movement, communication records.  So, no resource related to the FBI, or the U.S. Attorney’s Office will be unchecked in terms of trying to determine exactly if there was a command and control, how it operated and how they executed these activities.”

As usual, such investigations often involve “following the money” to determine the source or sources of financial assistance.  Large staged social disturbances require advanced planning and money.  They just don’t magically happen by themselves.

Obviously, much of this clandestine activity was going on days before President Trump spoke to the crowd on Jan. 6.

If the FBI investigation is a legitimate fact-finding attempt to discover the truth behind the Capitol Hill riots and not simply another fictitious Robert Mueller or James Comey comedy hour, then maybe we’ll eventually find out – again – that President Trump did not have anything to do with inciting insurrection.

Regardless of what claims Nancy Pelosi and her buddies may have fabricated.  Then again, we’re about to enter the Joe Biden era. . .

“The last time the Senate convened, we had just reclaimed the Capitol from violent criminals who tried to stop Congress from doing our duty. The mob was fed lies. They were provoked by the president and other powerful people,” McConnell said on the Senate floor, marking the first convening of the full Senate since the attack.