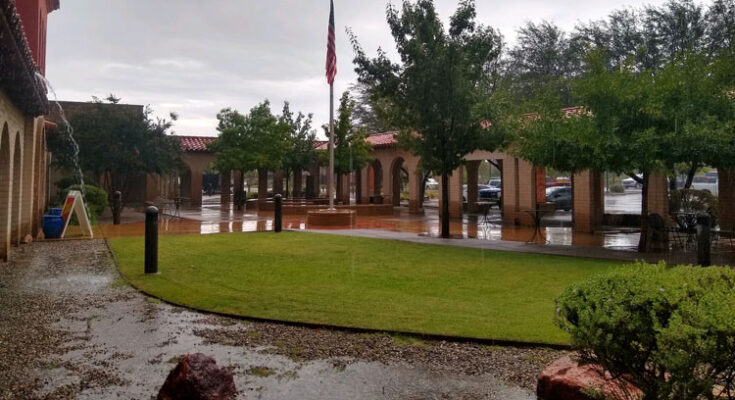 Walt Mares Photo/Gila Herald: Runoff from the heavy rain is shown in front of the Morenci Library on Wednesday.

Do not be ignorant, arrogant, or stupid

Some hard rain has been falling recently in Greenlee and Graham counties. The hills and flat desert are a beautiful green.

It has been at least seven years since the hills and deserts were so verdant. But with that beauty comes danger. Do not press your luck.

Usually, dry creeks, arroyos, and dips in the road can mean death when rainwater is rushing through them.

Is it a matter of some people’s arrogance, over-confidence, or just plain stupidity when people ignore the danger of swollen channels?

They are drivers who all too often end up dead or in peril of their lives. Their errant decisions may also cost the lives of others.

It may not seem dangerous when perhaps only a couple of feet of water are rushing through. So what! No big deal, especially if one is driving an SUV or one of those huge pickups one sees so many on the road these days, right? Hey, I have four-wheel drive so what is the big deal?

Wrong. Most folks do not seem to know how powerful water can be. It takes only a couple of feet of water flowing past to sweep a vehicle downstream. In Clifton, for example, there is a fairly deep dip in the road in Ward’s Canyon. It was about 10 years ago when along with regular rainfall there was a microburst at the top of the canyon. Water ran so hard that it tipped over a large flatbed pickup truck.

Other vehicles lay on their sides. A car with a woman in it was swept into the San Francisco River of which the Wards Canyon Creek is a tributary. Fortunately for the woman, she was rescued.

Although some work has been done to channel the creek, there remains a deep dip. A bright yellow sign reads, “When flooded, turn around don’t drown.”

There are no doubt many creeks, arroyos, and other channels in Greenlee and Graham. As in the rest of Arizona, there is a “Stupid Motorist Law” that applies to public roadways. Its purpose is to hopefully prevent people from taking what may become fatal chances of driving through swollen channels. The many people who ignore warnings not only put themselves at great risk but also those attempting to rescue them.

Yes, other people’s lives are endangered rescuing someone who refused to use common sense. The Stupid Motorist Law does not apply to flooded channels on private land. Unfortunately, a recent incident of floodwaters running through private land was fatal. It resulted in a girl drowning in Graham County in July.

The bottom line is, if you have any hesitation about crossing a flooded area, listen to that little voice inside you and turn around. At worst, you will not arrive at your destination when you planned to.  However, by using common sense, you will live to have another chance for you and your passengers to eventually arrive.