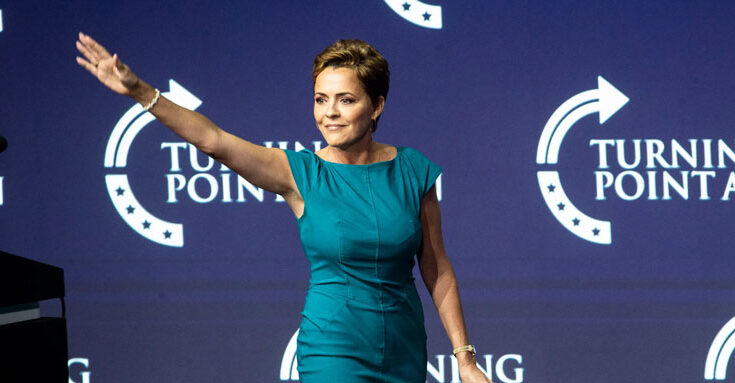 When I was a kid, a playmate flushed out a wolf spider’s hole. What came next was the stuff of nightmares.

A river of brown hairy things swarmed the ground – legs, and torsos in every direction. We took our bony limbs to safety with screams right out of Hitchcock.

I never saw anything like it again, until Donald Trump’s army swarmed the Capitol.

America had voted to flush him out, and so they came.

Depending on the species, a spider can birth thousands.

I saw one on CNN the other day: Arizona Republican gubernatorial candidate Kari Lake. Call her Spider Woman.

One right-wing pundit calls her the future of the Republican Party. That may be so if lies remain the GOP’s chief currency, and there’s no reason to assume it’s not an endless well.

Lake has a face for TV (Fox News, natch) and a gift of deflection. Don’t dare ask her a straight question.

She knows what got her the GOP nomination: being the most fetching and eloquent purveyor of the Big Falsehood.

That pundit who is so admiring might be right about Lake. Should she attain her goal in Arizona via the web spun by Trump – and should Trump get fitted for an ankle monitor or a deluxe penal suite – the further opportunity will knock for her.

It’s fascinating to see people like Lake and fellow election deniers attempt to explain the scope of fraud and corruption in the 2020 election without any evidence.

It’s the same backed-up toilet of campaign petitions that no court would sanctify.

Ultimately deniers like Lake turn to the, “So many Americans feel it was stolen.” This of course means:

“So many Americans were made frothy by a lie Trump devised even before the election.”

Ask Steve Bannon. Ask Roger Stone. Before the vote, Trump planned on saying his election was stolen. A 7 million-vote margin be damned.

U.S. District Judge David Carter has asserted that Trump knew that the jambalaya of steaming election fraud claims he has made before the court in a civil suit was all falsehoods.

Hence, Carter writes, Trump “more likely than not” broke the law in a bid to defraud the U.S. government and overturn the 2020 vote.

On the subject of all those Americans who were led to believe that the 2020 election was stolen, Congressman Jamie Raskin, D-Maryland, issued what deserves the Pulitzer Prize for put-downs.

Mocking the ex-president’s remark that conservatives “feel” the election was stolen, Raskin, a member of the Jan. 6 Committee, again asked: So where are the facts?

“They can’t say. They just have a feeling,” he said.

Back during the height of the pandemic, Trump uttered one of the most hilarious (and disturbing, coming from the leader of the free world) malaprops when he said that the crisis would end by way of “herd mentality.” (He meant, of course, “herd immunity” – itself a specious salvation under the circumstances.)

Author Mark Leibovich, while having great fun with this and more in his book “Thank You for Your Servitude,” a biting account of how spineless GOP leaders got wrapped around Trump’s little finger, observed how “herd mentality” now characterizes a “one-time party of rugged individualists.”

A Republican leader branded a pariah for speaking the truth, Liz Cheney said she doesn’t recall ever voting for a Democrat, but in Arizona, she most certainly would in the governor’s and secretary of state’s races.