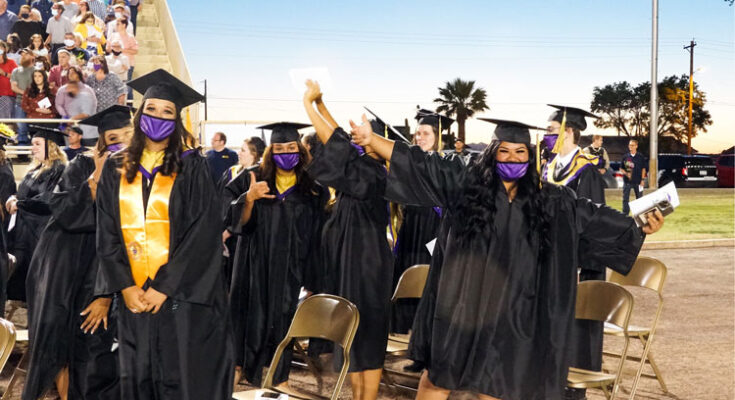 THATCHER – Eastern Arizona College’s 133rd Annual Commencement Ceremony is set for Friday, May 13, at EAC’s John Mickelson Stadium at 7:30 p.m. The event will commemorate an academic milestone for students from EAC and its joint degree program with Arizona State University.

The students and assembled audience of family and well-wishers will be called to order by Associated Students of Eastern Arizona College Service Coordinator Richelle Farnsworth, of Idaho Falls, Idaho.

Taking the podium on behalf of the graduating class will be Ian Syfert who is graduating with the highest honors and an associate of arts degree in psychology. While attending EAC, Syfert became a member of the All-Arizona Academic Team and was awarded a scholarship to Northern Arizona University in recognition of his outstanding academic performance and community service. He plans to continue majoring in psychology with the goal of working in the field of behavioral economics.

Dr. Melanie Russell will then speak, representing the administration, faculty, and staff of Eastern Arizona College. Russell has been an English professor at Eastern Arizona College since 2007 and an adjunct professor with Arizona State University since 2015. Born and raised on a small cotton farm in the Gila Valley, Russell graduated from Thatcher High School in 1992 and then attended EAC on a music scholarship. Later, Russell attended Northern Arizona University, earning both her bachelor’s degree in learning and pedagogy and her master’s degree in English studies. In 2019, she earned her Ph.D. in English literature from the University of Sheffield in the United Kingdom.

Commissioner Peterson has been an entrepreneur in Arizona for many years and supports Arizona’s small business community and economic development. She served as the president and CEO of the Tucson Hispanic Chamber from 2009 through 2018 and was the executive director of Greater Tucson Leadership from 2005 to 2009. She is the former chair of the Pima Association of Governments’ Economic Vitality Committee. Commissioner Peterson is currently the president of the National Association of Women Business Owners in Tucson and a member of the National Small Business Development Council advisory board for the U.S. Small Business Association.

Commissioner Peterson has been appointed to serve on the Arizona Judicial Council, which advises the Arizona Supreme Court, and the Arizona Finance Authority, which is the state’s bonding authority. She chairs the boards of directors of Carondelet’s St. Mary’s and St. Joseph’s Hospitals in Tucson. She also serves on the board of the University of Arizona Foundation and the Pima County Workforce Investment Board.

Concluding Friday evening’s commencement ceremony will be the conferring of Associate of Arts, Associate of Business, Associate of General Studies, Associate of Science, and Associate of Applied Science degrees to the graduation candidates. Students earning certificates will also be honored as well as bachelor’s degree earners from the EAC and Arizona State University concurrent degree programs.

Eastern Arizona College – the first community college in Arizona – has helped students claim their dreams since 1888. With campuses in Thatcher, Globe, and Payson, EAC’s qualified and caring instructors prepare students for the most in-demand careers and advanced study at universities. EAC offers more than 80 certificates and degrees, including the #1 nursing school in Arizona, a fine arts program featuring the only marching band in Arizona, and an engineering program that brings students up to speed for success at universities and top-tiered firms. Students thrive at EAC, making friendships that last a lifetime. EAC’s vibrant student experience includes on-campus housing, more than 30 clubs and organizations, active intramurals, and nationally-ranked athletic and e-sports teams. At EAC, most students leave with $0 debt. Let EAC provide an affordable way for you to claim your dreams. Contact admissions@eac.edu or call (928) 428-8272 today.