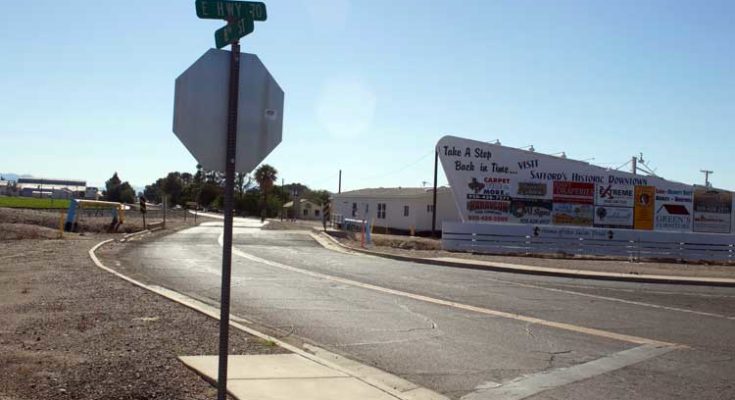 Jon Johnson Photo/Gila Herald: East 8th Street will close at U.S. Highway 70 and will instead loop to 7th Street.

SAFFORD – After more than five years since the Safford City Council first recommended closing East 8th Street at U.S. Highway 70, it now appears that decision will come to fruition.

The road will not become a 1,350-foot cul-de-sac, however, as the new plan is to purchase two pieces of property and create a connection to 7th Street, which in turn also connects to U.S. Highway 70 via Pine Avenue.

The Arizona Department of Transportation (ADOT) has pushed for the closure of East 8th Street at U.S. Highway 70 as part of its highway development plan. According to ADOT Safford District Engineer Bill Harmon, that plan will stretch from 20th Avenue to the 8th Street/Little Hollywood intersection and will also consist of changing out the old highway lights to new LED lights with an auto-dimming feature. The $800,000 to $1 million project will also reconfigure the island at the Walgreens to make it more traffic friendly and will square up Little Hollywood Road with U.S. Highway 70.

ADOT’s project is expected to be awarded to a contractor in October with construction likely starting in November. Harmon said the entire project should take about six months to complete.

“Like any other project in an urban area, we ask people for their forbearance and patience,” Harmon said. “The final product will be nice, but we will be in people’s hair for awhile.”

Safford Mayor Jason Kouts, who disclosed that his grandmother lives on East 8th Street and that he performs work for Roper Investment, said he was against closing 8th Street at the highway but that the new loop road allayed his concerns. Kouts said while he has familial and work connections, he has had “zero discussions with them” regarding the situation and that City Manager Horatio Skeete facilitated the property purchases and idea to create the loop road.

East 8th Street is a 25 mph road badly in need of repair and is in the city’s improvement plan for a complete renovation. The cost to reconstruct East 8th Street from U.S. Highway 191 to U.S. Highway 70 was roughly $1.5 million. The addition of the loop road will increase that amount.

“We have to go back to the engineers to get that redesign and include this additional 304 feet of roadway,” Skeete said.

The design for the reconstruction and loop road is expected to take place this year with construction possibly starting in 2019.

Previously, the council had proposed various ideas of fixing the intersection which is misaligned with Little Hollywood Road on the north side of U.S. Highway 70. Ideas included a traffic signal, roundabout, and realigning the roadways.

Each option has more cost than the new loop proposal. Additionally, the acquirement of the new right-of-way will allow for better drainage and the relocation of city infrastructure gas lines.

This article was updated at 4:30 p.m. on Thursday.