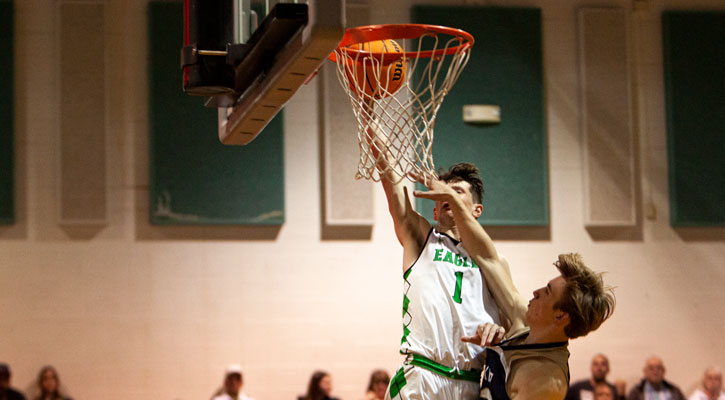 Jon Johnson Photo/Gila Herald: Bradley Curtis gets fouled on a dunk attempt against Parker in Round 1 of the 3A Boys State Basketball Playoffs on Wednesday night. The Eagles handled the Broncs 69-35 to move onto Round 2 of the State Playoffs and Gilbert Christian.

THATCHER – The No. 9 Thatcher Eagles boys basketball team notched its first playoff win under head coach Kyle Hull on Wednesday with a 69-35 thrashing of visiting No. 24 Parker in the first round of the 2022 3A Boys Basketball State Championship playoffs.

Most teams are aware of Thatcher’s all-everything Bradley Curtis and so it is likely they will attempt to key on stopping him with double and triple teams and whatnot. Parker was no different, the problem for the Broncs was that when Thatcher plays together as a team, they are one of the most dangerous in 3A.

“They were locking me down, and my teammates were open,” Curtis said. “I just gave them the ball and they put it in.”

The Eagles were merciless on defense, swarming the Broncs on nearly every possession, creating turnovers and fast-break opportunities.

And when those opportunities came Thatcher took advantage with good up-court passing for easy assists and layups.

When they weren’t running and gunning, Thatcher took apart Parker in the half-court game as well with its guards (notably Brandon Napier, T.J. Reed, and Christian Carter) driving hard into the lane and nailing long-ball shots from beyond the 3-point arc.

Not to be left out, forwards Hudson Griffin and Cody Jones also went to the rack repeatedly.

Hudson Griffin, for one, was on fire, especially in the third quarter as he hit back-to-back 3’s on his way to three in the quarter and a game-high 28 points. Griffin initially made his mark in the paint early on, utilizing the rim as a way to brush off the defender’s block attempts on reverse layups.

While the Broncs bottled up Curtis for most of the night, one can only hold him down so much and he also began finding the basket more often in the third quarter – in which Thatcher scored 27 points. Curtis, a junior, needed 6 points entering the game to have 1,000 points for his varsity career, and in between the third and fourth quarters, he was recognized for making that feat. Curtis finished with 11 points on the night and was also given a poster memorializing the achievement.

Other scorers for Thatcher included Christian Carter with 7; Cody Jones and Brandon Napier with 6 points each; T.J. Reed with 5, and Tanner Palmer, Bryce Larson, and Nick Puzas all with 2 points each.

Leo Scott Jr. led the way for Parker with 12 points; Alex Welsh had 8; Zach Bennett had 5; Elijah Fisher and Jesse Carrillo had 4 points each, and Trevor Elliot had 2 points.

Parker came out hot and led early 6-2 at the 5:51 mark in the opening quarter as Thatcher came out flat. Coach Hull called a timeout and, upon returning, the Eagles appeared more motivated and went on a 34-6 run over the next 11 game minutes.

“I can’t explain it,” Hull said. “It’s been almost every game. Sometimes it’s not until the second half. Luckily, we caught it early. When a team feels like they’re in it – and at that point, they (Parker) were looking like they felt they were in it – it’s hard to stop them, so we did a good job of pulling it together. I don’t know if it is shell shock or what, but it seems to be the case in a lot of games – starting slow.”

After going up 14-6 after the first quarter, Thatcher went for 23 in the second to go up 38-19 at the half due to balanced scoring from the Eagles.

Thatcher will next travel to face No. 8 Gilbert Christian on Saturday, Feb. 19, starting at 5 p.m. The winner of that matchup will likely see No. 1 Valley Christian in the quarterfinals.

Thatcher fell to Gilbert Christian at home on Jan. 15, 44-47, in the teams’ only regular-season meeting this year.

“Looking forward to that one,” Hull said. “(We) lost to them by three here (and) probably didn’t play our best. We’ll do a little more homework on them and see if we can put it all together and keep riding it. You have to go through the best to be the best and win it all, so whether you get them early or late you gotta go through them. I’m looking forward to it.”

No. 3 Pima will have its initial playoff game against No. 14 Miami in Prescott on Friday, Feb. 18, at Bradshaw Mountain High School, starting at 6 p.m.

In 1A, the No. 1 Fort Thomas Apaches will face No. 4 Leading Edge Academy in the state semifinals on Friday, Feb. 18, at the 5,100-seat Findlay Toyota Center in Prescott Valley. The winner will advance to the championship game on Saturday, Feb. 19, at 4 p.m. in the same venue.

In 2A, the No. 1 Pima Roughriders will play their opening playoff game against No. 16 Horizon Honors on Friday, Feb. 18, in Prescott at Bradshaw Mountain High School, starting at 7:30 p.m. (immediately following the boys game)

No. 10 Morenci defeated No. 23 Glendale Prep on Wednesday in the 2A Conference Play-in game, 66-18. The Wildcats will next play No. 7 Valley Lutheran on Friday, Feb. 18, in Prescott at Bradshaw Mountain High School, starting at 3 p.m.

In 3A, No. 1 Thatcher will host No. 16 Show Low on Friday, Feb. 18, for Round 2 of the playoffs, starting at 7 p.m. Thatcher had a first-round bye and this will be its first playoff game this season.