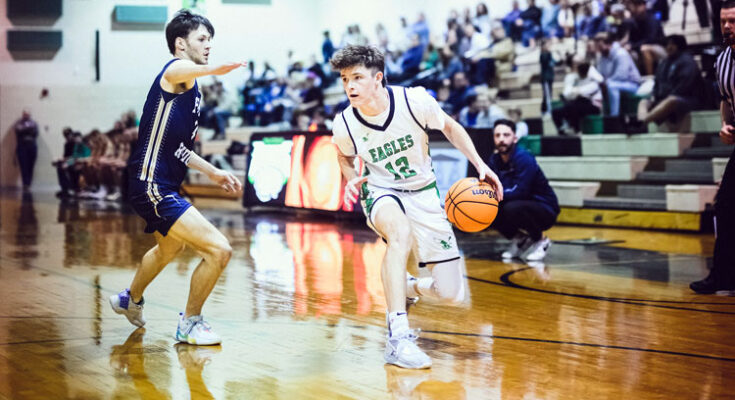 THATCHER – The Thatcher Eagles opened region play with a 61-58 nail-biter over the visiting Pusch Ridge Christian Academy Lions on Friday and capped off their weekend with a 63-51 victory over the Show Low Cougars on Saturday.

The Eagles have little time to rest, however, as they host rival Safford on Tuesday night, starting at 7 p.m.

There was a fair amount of animosity from the visiting crowd Friday night, as the match between the Eagles and Lions was whistle-heavy, but it appeared to be called evenly both ways.

The game came down defense in the last few seconds as Cody Jones came up with a steal for a turnover and then tied up the Lions’ player Ryan Robinson for another turnover to help seal the deal for Thatcher.

“Man, that’s a good team and they shot the lights out,” said Thatcher head coach Kyle Hull. “We kind of just expect it.”

In addition to his late-game defensive heroics, Cody Jones also put in some offense, including opening the game on a personal 5-0 run. Jones finished with 14 points and was a perfect 6-6 from the free-throw line.

The long ball kept the Lions in the game as PRCA hit 11 3-pointers, with four players nailing multiple shots from beyond the arc.

They started off hitting in the second half of the first period as Isaac Hardeman, Joe Voorhees, and Ryan Robinson all scored from deep to open up an 11-9 lead after one period.

Thatcher showed it could hit from deep too, and Bryce Larson (11 points) nailed two and Brandon Napier (13 points) had one as well in the second period to help keep Thatcher even with Pusch Ridge at the half, 25-25.

The Eagles spread the love in the third as seven different players scored and Thatcher went up 43-41 after three. Bradley Curtis had a game-high 15 points to quietly lead the Eagles.

“They really keyed in on Bradley at the post and I thought the guards did a good job of facilitating and kind of working the ball around to open (it) up,” Hull said. “Cody Jones had a great game, but that’s what we have when they do hone in on Bradley. He draws a lot of attention but we’ve got other guys who can step up.”

With under a minute left in the game and Thatcher down 1, Cody Jones and Bradley Curtis provided help-side defense on a drive from Robinson, and Jones came up with the steal. Napier was then fouled.

Napier and Cody Jones were both perfect from the line in the fourth period (4-4 and 3-3, respectively).

With Thatcher up 1, Robinson drove again but was tied up by Jones on the jump, which turned the ball back over to Thatcher.

Bradley Curtis was then fouled and made both to put Thatcher up 61-58 with 11.8 seconds to play.

With time running out, Robinson brought the ball up the court for a final 3-point try to tie, but Luke Franco was called for the moving screen and the ball went back to Thatcher with only seconds left to play.

The Lions sent Bradley to the line again but this time he missed both and Pusch Ridge got the rebound and had one last shot. Robinson brought the ball up and shot a deep 3 at the buzzer but it clanged off the rim and Thatcher prevailed, 61-58.

“What I’m most proud of is we got down late and our guys could have hung their heads and they didn’t,” Hull said. “They fought, they battled, and we came out on the right side finally.”