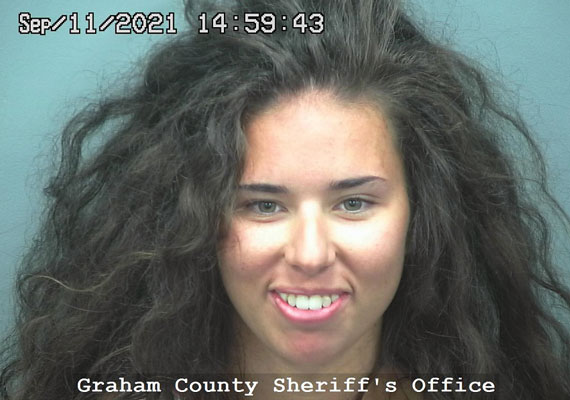 GRAHAM COUNTY – An Eastern Arizona College tennis player from Eastern Europe has had her scholarship rescinded after being arrested on Saturday, Sept. 11.

Simona Iliev, 19, was arrested and booked into the Graham County Adult Detention Facility on charges including assault, resisting arrest, disorderly conduct, and criminal trespass in the first degree.

Graham County Sheriff’s Office deputies were initially dispatched at about 9:08 a.m. to a residence on North Reed Lane regarding a suspicious woman wearing black leggings and a sports bra who was seen rummaging through the victims’ car.

According to the victims’ statements to deputies, upon hearing a noise outside they investigated and located Iliev inside their car. When approached, one victim advised she believed Iliev was suffering from some sort of mental issue due to her actions and the way she looked. The victim said Iliev gave her a “grin that was scary” and told her that “I’m here to save you” and then tried to grab the victim.

The victim then yelled at Iliev to stop and Iliev allegedly yelled at the victim’s son and attempted to make her way into the residence prior to retreating into a ditch and began running away. Another resident advised that Iliev had opened all the canal gates.

Iliev was located in the Graham Cemetery sitting on top of a grave. She initially refused deputies’ commands and insisted her leg was injured.

While the deputy attempted to detain Iliev, she allegedly resisted arrest and said she didn’t know what was going on because it was a culture shock to her. Iliev ultimately had to be picked up by deputies and placed into a patrol vehicle. Even then, she refused to be cooperative with EMTs who were called to assess her medical condition. Iliev continued to refuse deputies’ commands until she was threatened with being struck by a TASER. Iliev then complied and was taken into custody in another patrol vehicle.

However,  Iliev continued to resist while at the Mt. Graham Regional Medical Center and declined medical treatment. Again, she had to be threatened with a TASER before she complied with the deputy’s commands. Once at the jail, the situation failed to improve, and Iliev was placed in a restraint chair as she yelled in a foreign language, according to the report.

The deputy contacted EAC, and the tennis coach verified Iliev was here on a scholarship to play tennis and had only been at EAC for about a week. The tennis coach advised that she had noticed odd behavior from Iliev and that at one point campus security had to get involved as she was bothering and harassing her roommates and not making any sense. The tennis coach also advised that she had recently found out that a person she believed to be Iliev’s agent was actually her boyfriend. The coach advised that EAC was going to revoke her scholarship and send her back to her home country, according to the Sheriff’s Office report.

While at the jail, Iliev’s behavior continued to be disruptive until the following day when she was “in a good mood.” However, she continued to exhibit odd behavior and was shown on video throwing her food around her jail cell and standing on her bed, and acting strange.

The jail contacted mental health professionals and a crisis team member met with Iliev in the visitor center. However, Iliev reportedly refused to speak with the crisis counselor. The report informed that a jail medical counselor was scheduled to meet with Iliev later this week.

When questioned about the incident and fallout, EAC Director of Marketing and Media Relations Kris McBride released the following statement.

“EAC’s student-athletes are expected to abide by the college’s Student Code of Conduct and behave in a socially responsible manner at all times. Whenever there is a serious violation of this code, we take immediate action to address the situation.”

“Due to federal protections on student information, we cannot comment on this individual’s academic status. EAC is working closely with the Graham County Attorney’s Office to resolve this situation.”

On Wednesday, McBride advised the school was still examining the situation and that the health of its students was its first priority.