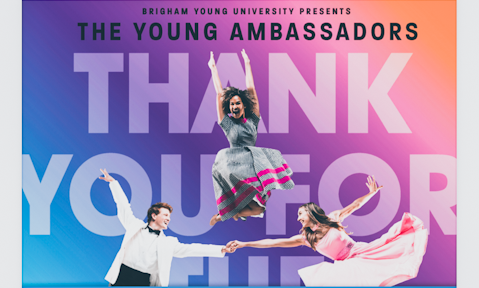 THATCHER — It has been more than 50 years since BYU’s Young Ambassadors had their first appearance in the international spotlight at Expo ’70, in Osaka, Japan. Since then, 1,700 Young Ambassadors have traveled thousands of miles, visited 68 countries and met millions of new friends who long remember the group’s fast-paced choreography and beloved melodies. Young Ambassadors have captured the hearts of young and old through half a century of tours. Young Ambassadors continue their energetictradition of song and dance as they recall their past travels in their new show — Thank You for the Music.

Young Ambassadors feature 20 of BYU’s best singers and dancers, and four of BYU’s finest instrumentalists in the Young Ambassador Showband. This showband is conducted by Jarom Hansen and features show-stopping pieces, adding dynamic energy and class toThank You for the Music.

Come see the high-energy performance at the David M. Player Center for the Arts on Nov. 2 at 7 p.m. Click here to get tickets or go to www.eac.edu and click “Get Tickets.”

Young Ambassadors is a group filled with members who are excited to share their talents, experiences and love through their show, Thank You for the Music. The world-traveled troupe shares decades of the best in entertainment with music by the iconic Queen, ABBA, Whitey Houston, and a touch of the new Ed Sheeran, BTS, and Disney. The new Young Ambassador show, Thank You for the Music, presents the great musical hits of radio, stage, and screen, celebrating the songs by which we live our lives. The songs fromradio, tv, movies, and the Broadway stage have made us all who we are today and the Young Ambassadors commemorate them through their mesmerizing musical escapade on stage. Thank You for the Music features numbers from Broadway’s “Guys and Dolls”,“Wicked”, “Newsies”, and others round out their lineup for a memorable journey throughsome of your favorite songs over the past 50 years.

Throughout the world, Young Ambassadors are followed by a strong reputation as wholesome, professional entertainers. The group recently traveled to Korea this past summer to share their message and show. This year, they will take their show to cities in Arizona, England, and Scotland.

Young Ambassadors represents the Department of Dance from the College of Fine Arts and Communications at Brigham Young University in Provo, Utah. BYU is one of America’s largest private universities with more than 30,000 students from all over the United States and 100 foreign countries.

Prior to his assignment as director of the Young Ambassadors, Nathan had multipleopportunities to set choreography on the group, traveling twice with them to China. Nathan also directed BYU’s Contemporary Dance Theatre and choreographed at Sundance, Hale Center Theatre Orem, Lagoon Entertainment, Nauvoo, IL, and Utah COPA. He readilyteaches workshops on dance, music, choreography and performance. He is married and has four beautiful children.