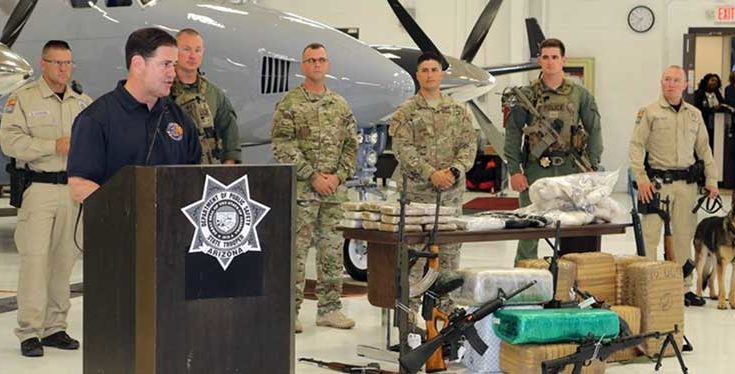 Photo By Rachel Beth Banks/Cronkite News: Gov. Doug Ducey said a strike force against border crime will soon get more troops to expand the operation to 24 hours. Border security based solely on “talk without action isn’t just cheap, it’s dangerous and deadly,” he said at a news conference.

PHOENIX – Gov. Doug Ducey said Wednesday the state will spend $2.9 million in fiscal 2019 on a three-year-old multiagency effort to stop drug trafficking and human smuggling at the border.

The Arizona Border Strike Force has seized 60,000 pounds of marijuana, 300 guns and “enough fentanyl to kill 11 million Americans,” since it was launched in 2015, he told a news conference.

Law-enforcement agencies involved in the task force include the state Department of Public Safety, Cochise, and Pima counties’ sheriff’s departments.

“Make no mistake, this is about transnational crime,” Pima County Sheriff Mark Napier said. “This is about a public-health emergency to our state and to our nation with the opiate crisis.

“As much as 40 percent of all the illegal narcotics that come into the United States come through my county at some point. When there’s an overdose of fentanyl in a street in Illinois today, it most likely came through here.”

Ducey said the federal government too often responds to Arizonans’ requests for help with “empty words and little action.” The state stepped with nearly $3 million in the fiscal 2019 budget to hire 12 troopers, which will expand the strike force to a 24-hour operation, according to a news release.

Ducey’s office did not say how much has been spent on the task force to date.

“The other thing we don’t speak enough about is the human rights issue associated with our poorest border,” Napier said. “Sheriff Daniels and I, every year, recover more than 200 bodies in the deserts of our counties.”

An immigration advocate said the strike force is the wrong approach.

“I believe this $3 million is being misspent, and that in fact, it helps to create more of the uncertainty, more of the instability and more of the insecurity that we have seen in the past 20 years on this border,” Garcia said.