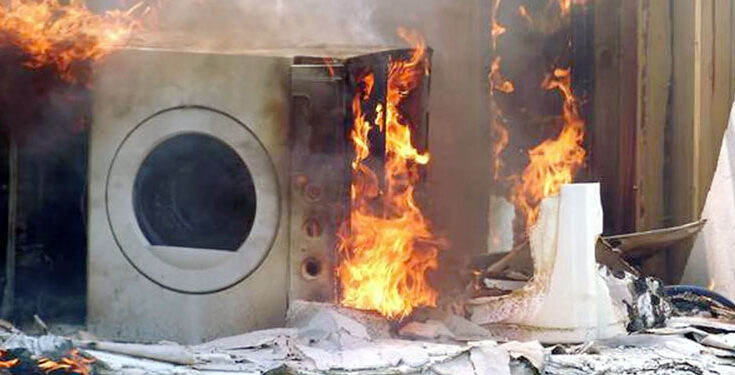 Photo for illustrative purposes: A dryer caught fire at a residence recently, prompting a response from the Safford Fire Department.

GRAHAM COUNTY – A family, fortunately, managed to put out a dryer fire before it spread to the house on Tuesday.

According to a Graham County Sheriff’s Office report, police and firefighters were dispatched at about 4:30 p.m. to a residence on S. Lariat Way regarding a dyer on fire. Upon arrival, the fire had already been extinguished, however, the Safford Fire Department still removed it from the house and checked it further.

The occupants of the home said they were doing laundry when they saw smoke and noticed the dryer was on fire. After expelling a fire extinguisher, they managed to put the fire out with some water hoses from outside prior to the fire department’s arrival.

The Safford Fire Department aired the smoke out of the house and checked for hot spots but didn’t find any. There was reportedly smoke damage to the ceiling of the residence.

The occupants were examined by Lifeline personnel at the residence and all declined medical treatment.

• Have your dryer installed and serviced by a professional.

• Do not use the dryer without a lint filter.

• Make sure you clean the lint filter before or after each load of laundry. Remove lint that has collected around the drum.

• Make sure the air exhaust vent pipe is not restricted and the outdoor vent flap will open when the dryer is operating. Once a year, or more often if you notice that it is taking longer than normal for your clothes to dry, clean lint out of the vent pipe or have a dryer lint removal service do it for you.

• Keep dryers in good working order. Gas dryers should be inspected by a professional to make sure that the gas line and connection are intact and free of leaks.

• Make sure the right plug and outlet are used and that the machine is connected properly.

• Follow the manufacturer’s operating instructions and don’t overload your dryer.

• Turn the dryer off if you leave home or when you go to bed.