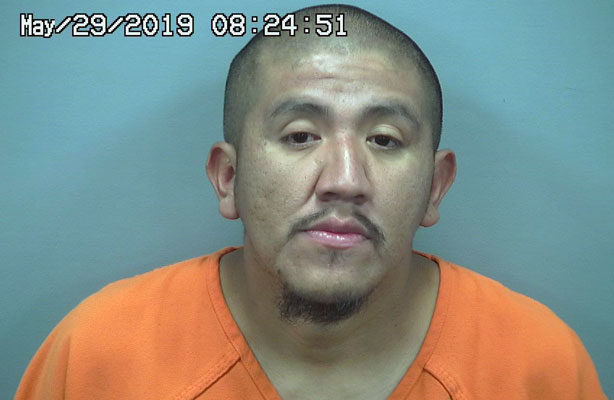 Contributed Photo/Courtesy GCSO: Jeremy Hooke was arrested and booked into the Graham County Adult Detention Facility on charges of assault and disorderly conduct.

SAFFORD – Another week has gone by and yet another drunken domestic assault lands a man behind bars.

Jeremy Hooke, 35, was arrested and booked into the Graham County Jail on charges of assault and disorderly conduct.

A Safford officer was dispatched at about 8:21 p.m. to a residence in the 2000 block of S. 20th Ave. on May 28 regarding a disturbance. While en route, the officer was informed that the man causing the disturbance was a Native American male wearing black shorts.

The officer then noticed a man matching the description of the suspect walking on the sidewalk in front of an apartment complex. The man had a small cut on the back of his head and was “very intoxicated”, according to the report.

The officer took custody of the man, identified as Hooke, and went to the victim’s apartment to interview her.

The victim said Hooke was the father of their son and had come to the apartment asking if he could sleep there. However, Hooke is not allowed in the apartment and when she told him he could not sleep there he began arguing and forced his way inside, according to her statement to police.

The victim said she then went and sat on the couch and Hooke followed her and punched her in her head two times. The officer noted seeing a bump over the victim’s left eye.

The officer inquired about how Hooke came to have a laceration on his head and the victim said her 8-year-old sone threw a glass at him while he was assaulting her and it struck the back of his head. The boy later corroborated his mother’s version of events and a broken glass cup was located on the floor near the couch.

After paramedics from Lifeline Ambulance treated both the victim and the suspect at the scene, Hooke was placed under arrest and transported to the jail.