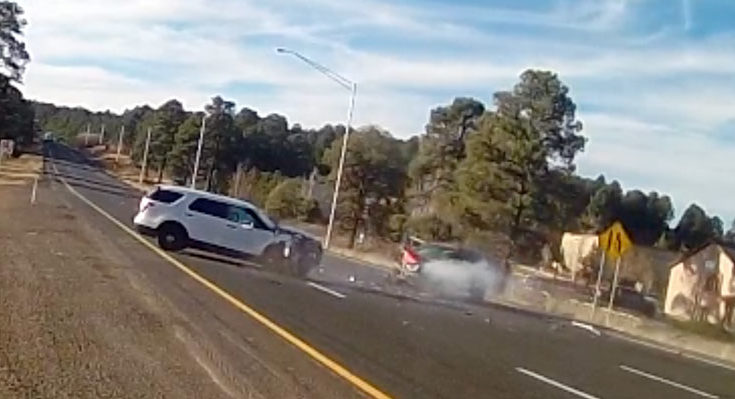 This still from a video taken by a motorist shows the immediate aftermath of the collision. (Courtesy DPS)

The driver had her 2-year-old daughter in the backseat

FLAGSTAFF – An Arizona Department of Public Safety (DPS) sergeant acted quickly and heroically by creating a traffic break moments before a wrong-way driver collided head-on with his patrol vehicle on Interstate 40 (I-40), likely saving the lives of other motorists.

The incident occurred Nov. 17, along I-40 near Flagstaff. Shortly after 3:30 p.m., DPS began receiving calls reporting a reckless driver in a Nissan Rogue traveling on the sidewalk and nearly striking several vehicles along Milton Road in Flagstaff. A trooper located the vehicle on I-40 westbound near Flagstaff and initiated a traffic stop. The driver then fled the wrong way, traveling east within the westbound traffic lanes of I-40.

The DPS sergeant responding to the call entered the westbound lanes of I-40 and quickly began a traffic break to stop westbound traffic. Immediately after the vehicles came to a stop for the traffic break, the wrong-way driver struck the sergeant’s stopped patrol vehicle head-on. The sergeant’s swift actions prevented a high-speed collision between the motorists and the wrong-way vehicle.

Video of the head-on collision. The video was taken by a motorist who was stopped from continuing westbound and released by the DPS.

After being released from the hospital, Carvalho was booked into jail on charges of attempted second-degree murder, aggravated assault, endangerment, aggravated DUI, and child abuse.

Carvalho’s 2-year-old daughter was placed in the custody of the Arizona Department of Child Services.

“The video taken by another motorist, whose life may have been saved by the actions of this heroic sergeant, tells the true story of what happened,” said Col. Frank Milstead, Director of the Arizona Department of Public Safety. “Sadly, it’s a stark reminder of the risks that impaired drivers pose to the public and to our troopers, who selflessly put themselves in harm’s way to stop them.”