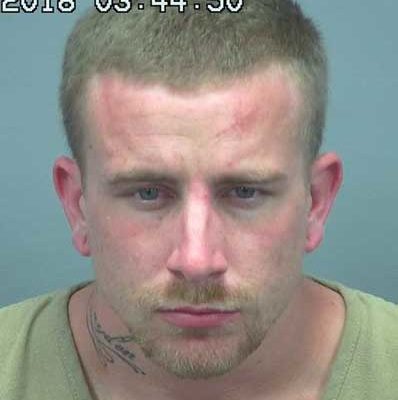 Contributed Photo/Courtesy GCSO: Alexander Schade was arrested for an outstanding warrant during a traffic stop and was found to have meth and drug paraphernalia.

SAFFORD – Drug addiction doesn’t care who a user is. Drug dealers only see one color – green – and have little regard for the destruction that lays in the wake.

Once drug addiction gets ahold of a user, it can be extremely hard to break free.

Alexander Cain Schade, 25, of Safford was arrested early Monday morning after officers found him in possession of methamphetamine and drug paraphernalia.

Schade was pulled over at about 1:46 a.m. after allegedly making an improper left turn onto U.S. Highway 70 from U.S. Highway 191.

During the traffic stop, the officer learned Schade had an active warrant out of Safford Justice Court regarding his failure to appear on a charge of possession of drug paraphernalia. The officer also noted Schade appeared to be overly nervous and had put an unlit cigarette in his mouth backward with the filter on the outside.

While Schade initially denied having any needles on him, the officer found a used syringe in Schade’s front pocket. Schade’s passenger, Michelle Marie Mitchell, 36, attempted to hide a filled syringe she later said Schade had given her as they were getting pulled over. Mitchell admitted to being a meth user but said she didn’t like needles and preferred to snort the drug instead. Three other used syringes were located on the vehicle’s floorboard and a small round container with white, powdery residue was found in the center console.

After he was arrested, Schade allegedly told the officer that all the needles were his and that he had indeed given the needle with liquid in it to Mitchell to hide. He also said the container with residue was his as well.

Schade was then booked into the jail on his warrant and was advised charges of possession of a dangerous drug (methamphetamine), and possession of drug paraphernalia are pending review by the County Attorney’s Office.

Mitchell was advised she also faced possible charges of possession of a dangerous drug and possession of drug paraphernalia and was released.

A community-wide effort to bring a sober living facility to Safford has received financial and other support from various groups. Additionally, there is an effort to bring a drug rehabilitation center here as well.

Editor’s note: This article was updated at 1:15 p.m. to correct a previous version.