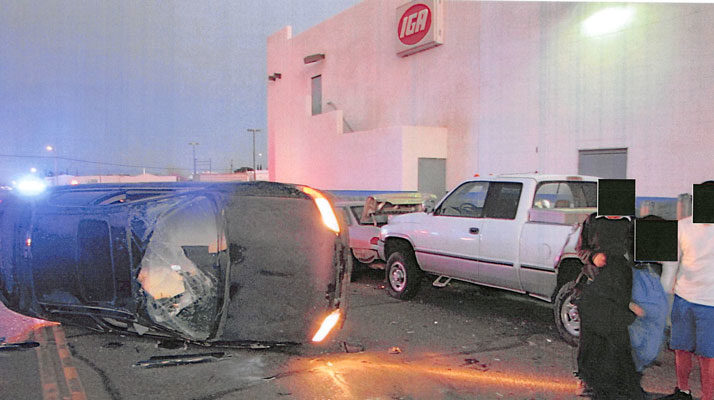 Contributed Photo/Courtesy SPD: Police believe the driver of this Honda sedan flipped on its side crashed into a parked truck because she was high on heroin.

SAFFORD – A three-vehicle collision near Thriftee Food & Drug on Tuesday, March 19, was allegedly caused by a driver high on heroin.

According to police reports, Sylvia Mendez-Moreno, 40, of Safford, was driving a 1998 Honda sedan westbound on 8th Street at about 6 a.m. when she collided with a properly parked white, Dodge pickup truck. The force of the collision drove the pickup truck forward at least 10 feet into another properly parked brown, Ford Taurus and caused the Honda to tip over onto its side. The driver of the Taurus had just parked and was still inside when the collision occurred but didn’t report any injury.

Neither Mendez-Moreno or her juvenile male front-seat passenger were wearing seatbelts but Mendez-Moreno escaped the collision without injury and her passenger only had superficial wounds to his leg. Paramedics from Lifeline Ambulance treated the passenger at the scene, according to the report.

Mendez-Moreno allegedly told officers that she was only traveling between 20 – 25 mph at the time of the collision and that she didn’t know what happened. While speaking with Mendez-Moreno, the officer believed she may be impaired, so another officer began a DUI investigation.

According to that report, Mendez-Moreno allegedly admitted to recently smoking heroin and marijuana. Additionally, the officer listed several clues to impairment and advised that Mendez-Moreno failed a field sobriety test.

A blood sample was taken and charges are pending lab test results and review by the Graham County Attorney’s Office.