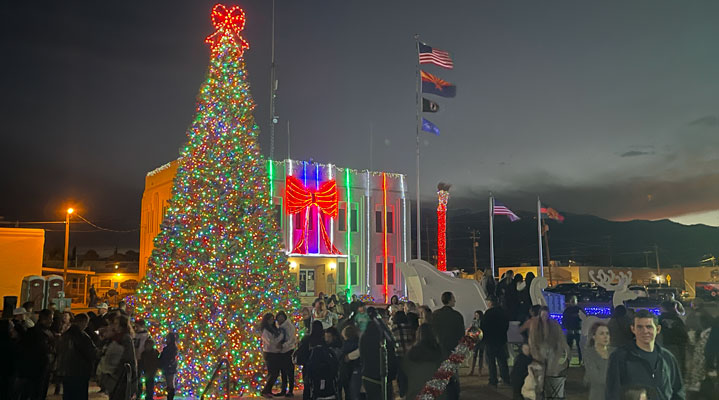 The event was postponed last year due to the pandemic, but the crowd Friday night appeared to near pre-pandemic numbers if not skewer only slightly lower as the throngs of attendees stretched across the streets Downtown and led into long lines for the more popular attractions.

Safford Mayor Jason Kouts officially gave the countdown to light up the tree and city decorations and start the holiday season by visiting some of the shops Downtown. Safford Downtown Association President Danny Smith gave the crowd even more incentive to visit the various participating shops with his “Treasure Hunt” where clues found at various spots would assist the scavengers to a treasure of $1,200 worth of gift cards from local businesses hidden in bows.

Numerous bouncy houses/inflatable slides were at both sides of the event for the children and there were various activities as well. Those young and old both enjoyed trying to stay on the bucking reindeer as long as possible; tasty treats were available for purchase, but Gila Valley Made had a fire pit for its Smores operation and gave away chocolate marshmallows to toast along with the graham cracker and stick.

The voices of children rang throughout the streets with the children’s choir performance and the karaoke stage.

The biggest lines were saved for the jolly old elf St. Nick himself, who greeted guests in the recently renovated Safford Theatre.

Safford Downtown President Danny Smith summed up the evening as being Americana at its finest.

“It’s pure gold, pure U.S.A.,” Smith told the crowd. “We didn’t get to do this last year and it feels great to be back.”

The fun will continue Saturday, Dec. 4, with the 24th annual Light Parade. The event starts at 4 p.m., with the parade starting at 6 p.m.