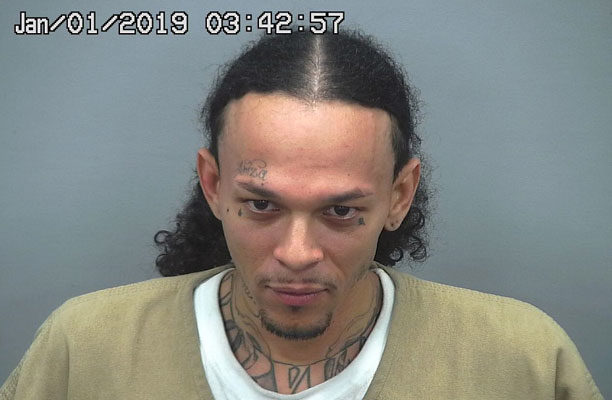 Contributed Photo/Courtesy GCSO: Johnny Nunez was picked up on a warrant just over an hour into the new year after allegedly causing a disturbance at a local bar.

SAFFORD – The new year usually brings resolutions, but for a Safford man it appears that it will bring more of the same.

An officer was dispatched to the bar at about 1:15 a.m. regarding a disorderly customer and a bartender requested Nunez be removed from the bar.

According to a Safford Police report, Nunez left peaceably, but afterward, the officer learned Nunez was wanted on a felony warrant for his arrest out of Maricopa County.

Nunez was located walking down Main Street near the intersection of 6th Avenue and was placed into handcuffs as County Dispatch confirmed the warrant.

While the officer searched Nunez, the suspect attempted to flee while handcuffed but didn’t even make it away from the officer’s patrol vehicle, which he then pinned Nunez to in an effort to take control of the situation.

Nunez, who previously spent more than three years in prison after pleading guilty to possession of a dangerous drug for sale in Graham County, said he knew that with the arrest he was going to go back to prison, so he felt he had nothing to lose in trying to escape. Nunez was last released from prison at the end of October 2017.

Nunez was then transported to the Graham County Adult Detention Facility and booked on his warrant.