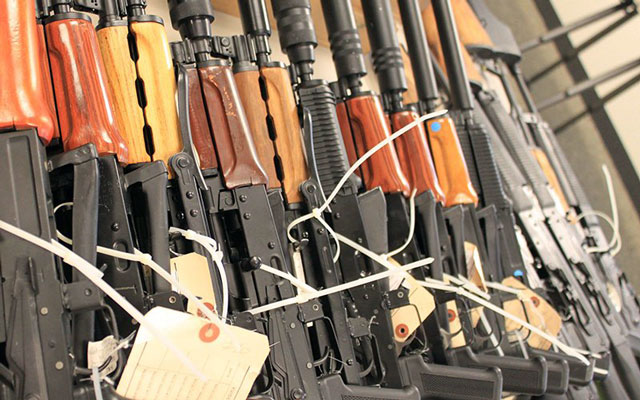 File Photo By Rebekah Zemansky/Cronkite News: The number of gun manufacturers in Arizona grew by 218% from 2010 to 2020, from 128 such businesses to 407. That was the third-highest in the nation, trailing only Texas and Florida, according to the Bureau of Alcohol, Tobacco, Firearms and Explosives data.

WASHINGTON D.C. – Eight years in the Marine Corps did not make Patrick Baughman a gun enthusiast. Arizona did.

After moving to Lake Havasu in 2014 and cycling through what he calls a series of “bum jobs,” Baughman realized that people in the local gun-owner community would pay him to clean their weapons, a skill he learned in the military.

That turned into a storefront business and, in 2018, Baughman opened US Arms, a manufacturing business that he said assembles, builds, and sells at least 1,000 AR-15 rifles and other firearms a year.

“It started to make sense,” Baughman said of the decision to open his business. “I needed to at least get started.”

When it opened in 2018, US Arms was one of 356 gun manufacturers in Arizona, a number that had grown to 407 by 2020. That trailed only Texas and Florida that year, according to the Bureau of Alcohol, Tobacco, Firearms and Explosives’ “Firearms Commerce in the United States” report for 2021.

At a time when headline-grabbing mass shootings are driving calls for gun reform, gun manufacturing in Arizona appears to still be a growth industry.

“The business is doing very well,” Mark Oliva, managing director of public affairs at the National Shooting Sports Foundation, said of Arizona. “And again, it’s all in response to the consumer demand.”

Oliva credited the state’s history of pro-gun business climate as well as a skilled, readily available labor force for its robust gun-manufacturing industry, which grew 218% between 2010 and 2020.

The overall industry, including retail and services, employed 11,933 workers in Arizona who were paid $778.6 million in wages in 2021, according to a National Shooting Sports Foundation report released in March. NSSF, also known as the Firearms Industry Trade Association, estimated the firearms industry generated $2.3 billion in economic impact for the state that year.

Gun manufacturers come to the state in part for its less-strict gun laws and those manufacturers, in turn, instigate more gun-friendly regulations. It’s a symbiotic relationship that makes Arizona a tough sell for gun-reform advocates.

“I think the majority opinion here is very pro-Second Amendment, very lax gun regulations,” said Brooke Zanon, a lead organizer for March for Our Lives Arizona. “My guess is that we’re third to manufacturing because we really don’t have a lot of hard-set laws that prohibit people who shouldn’t have guns from getting guns.”

But what Zanon calls “very lax,” Baughman sees as “commonsense and smart firearm laws,” part of the reason he opened his business in the state. Michael Infanzon, a lobbyist for the Arizona Firearms Industry Trade Association, said that’s good for business generally, not just the firearms business.

“We have a really, really robust economy in Arizona. And the firearms industry is flourishing here,” Infanzon said.

“There’s a lot of reasons for that,” he said. “But it comes down to: We have people, we have representatives and senators, legislators that look at our Second Amendment and look at the business practice and put them together and say, ‘Hey, you know what? This is good business.’”

Good business, but bad policy, according to gun-reform advocates.

Arizona got a grade of F from Giffords, which ranked Arizona 42nd in the nation for its gun-safety laws, while Everytown for Gun Safety deemed the state a “national failure,” ranking it 43rd for gun-law strength. Everytown noted that the state was one of the first to do away with permits for concealed carry and said state lawmakers continue to push for “dangerous pieces of legislation.”

But industry officials said the gun business can be tough, even in a gun-friendly state.

Recent shootings at a Buffalo grocery that killed 10 and at a Uvalde, Texas, elementary school that killed 19 students and two teachers put the industry in an unwelcome spotlight.

Like many of the nation’s large gun manufacturers, Sturm Ruger, which has a 230,000-square-foot facility in Prescott, got a letter in May from the House Oversight and Reform Committee as part of its investigation into the latest mass shootings. The letter demanded information on the sale and marketing of the firearms it sells as “guns have become the leading cause of death for children and teens.”

Zanon said the industry has only itself to blame.

“The responsibility heavily falls on the gun industry to take protection measures and make sure that they know who they’re selling these guns to,” she said.

Gun-rights proponents argue that many Arizonans’ livelihoods are now under attack because their industry is being used as a scapegoat for the shooting.

“We don’t blame the shooters, we blame the instruments that they use,” Infanzon said. “When you have a drunk driver, you blame the driver not the alcohol, the bar, or the car.”

Baughman is currently working with his sixth credit card processing company after the others stopped dealing with gun manufacturers. Social media sites like Facebook do not allow gun manufacturers to advertise, and Bank of America stopped doing business with gun makers in 2018, a move that other major banks have followed.

“There are unique challenges because of what we decide to involve ourselves in, and that is, sales of firearms,” Baughman said.

In response, the Arizona House earlier this year passed a bill to penalize any company that refuses to do business with firearms companies. That bill has stalled in the Senate, however.

Infanzon said he is actively lobbying lawmakers on that bill, along with other industry-backed legislation.

“It doesn’t boil down to just a firearm. It’s economic policies, pro-business policies,” Infanzon said. “If a business or an industry grows … It helps the state as a whole.”

Zanon acknowledges that changing the dynamic in Arizona will be a challenge.

“If we do get a meeting with a senator or representative, it’s like, we want them to be listening to us, but sometimes it’s like they’re refusing us because we’re young,” said Zanon, 21. “It’s like we really can’t do anything to influence their vote.”

But with the gun-control movement gaining steam across the country, she is hoping the tide turns soon in Arizona.

“I do think that if we can just get out of our own way, we can actually do important things,” she said. “We can pass important legislation to protect our kids and protect our teachers and schools.”

Oliva said the gun industry is ready to sit down, talk and work alongside others – even those who make “misguided accusations” against it.