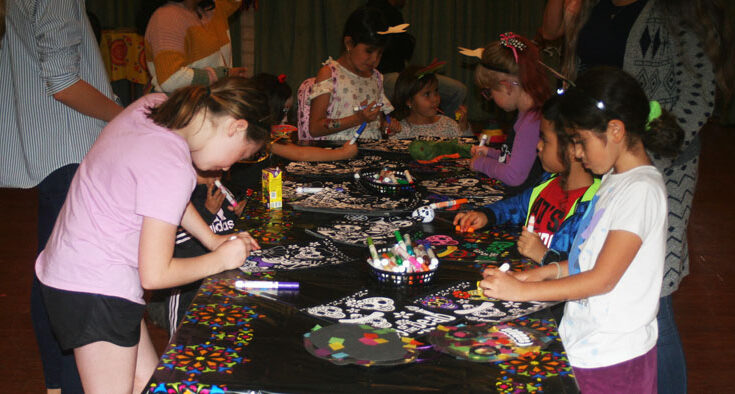 Walt Mares Photo/Gila Herald: Children focus on their individual art projects as parents look on at the Oct. 20 Dia de Los Muertos celebration at the Morenci Club. The place was packed with children working on their artistic endeavors.

MORENCI – Call it something of a warmup for the spooky day soon to come – Halloween. But it did not involve any scary creatures walking through the streets of Morenci and Clifton. No one wore masks or were dressed up as they will be on the coming night of fright.

What it involved was family fun and creativity. It was a celebration of “Dia de Los Muertos” – the Day of the Dead, on Thursday, Oct. 20.

There were about 100 or more children and their parents at the Morenci Club involved in creating artistic renditions of the special day of Dia de Los Muertos theme. There was coloring and several other forms of creating different twists of imagination in each child’s mind. What made it special was that so many parents were involved in observing and helping kids with their individual projects. Those parents appeared as enthused as their young ones. Grownups did not impose themselves on their little one’s efforts and were there primarily to give their support.

That made the event very family oriented and fun for everyone.

Several tables with plenty of space were set up for participants to do their thing. A variety of materials were provided at each table giving kids plenty to work with.

Adding some spice to the event was a table with delicious chips and salsa for anyone desiring an extra kick. The chips were delicious and easy to crunch on and the salsa had a kick to it but not so much that it caused any discomfort to anyone’s tongue. Eric Walker of the Morenci Community Services cheerfully passed out the goodies on paper plates.

Dia de Los Muertos is a long-established tradition in Mexico and has in recent years become popular in the U.S., particularly in states such as Arizona that share a border with Mexico. Also, there are many people in Morenci and Clifton of Mexican heritage.

To say the least. a good, lively time was had by all on the Day of the Dead.