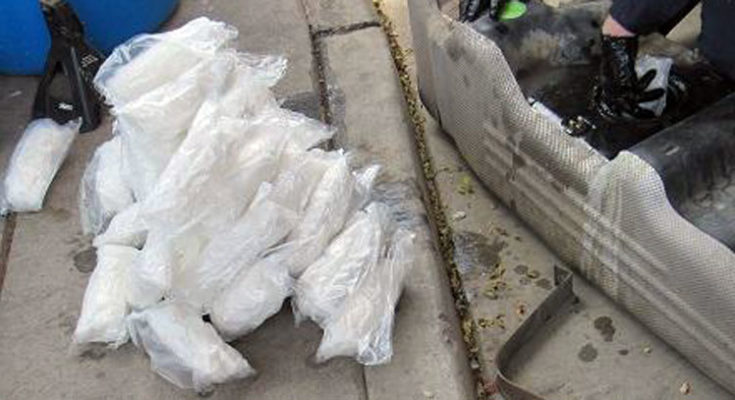 PORT OF SAN LUIS – U.S. Customs and Border Protection officers arrested a San Luis, Sonora, Mexico, man and four U.S. citizens this earlier this week for four separate alleged attempts to smuggle 282 pounds of methamphetamine and cocaine through the Port of San Luis, worth nearly $903,000.

Officers referred a 69-year-old Yuma man for additional inspection of his Ford truck as he attempted to enter the U.S. early Tuesday morning. After a CBP narcotics detection canine alerted to a scent it was trained to detect coming from within the gas tank, officers discovered nearly 130 packages of narcotics. The drugs were identified as nearly 75 pounds of meth, worth an estimated value of more than $224,000.

That afternoon, officers referred an 18-year-old Tolleson woman for further inspection of her Nissan sedan as she attempted to enter the U.S. Officers searched the vehicle and located 70 package of drugs throughout. The packages were determined to be more than 95 pounds of meth, worth almost $286,000. They also seized almost 3 pounds of cocaine, worth over $63,000.

Wednesday afternoon, a 57-year-old Mexican national from San Luis, Rio Colorado, Sonora, Mexico, was referred for an additional search of his Ford SUV. Once a canine alerted to the presence of drugs, officers removed more than 60 packages of drugs from a non-factory compartment in the rear of the cab wall. The drugs were identified as more than 55 pounds of meth, worth almost $166,000.

Early Wednesday morning, a 28-year-old Phoenix woman and her 22-year-old female passenger, also from Phoenix, were questioned as officers referred a Toyota sedan for further inspection as they attempted to enter the U.S. A search of the vehicle led to the discovery of nearly 55 pounds of meth, worth almost $164,000 that was hidden inside the rear quarter panels as well as in the spare tire.

Officers seized the drugs and the vehicles, while all five subjects were arrested and turned over to U.S. Immigration and Customs Enforcement’s Homeland Security Investigations.