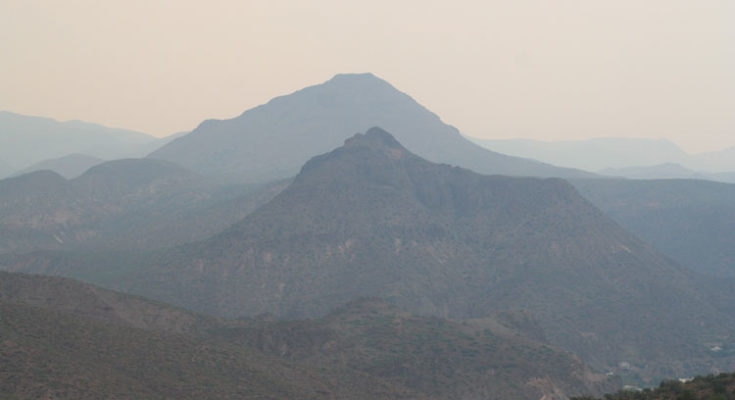 Walt Mares File Photo/Gila Herald: Clifton Peak, in the foreground, is obscured in a haze from a wildfire in the Apache-Sitgreaves National Forest. Smoke from multiple wildfires currently burning could affect those in the area.

APACHE-SITGREAVES NATIONAL FOREST – The Cow Canyon Fire, ignited by lightning on Aug. 18, on the Alpine Ranger District, Apache-Sitgreaves National Forests, is burning in steep, rugged terrain in a remote location within the Blue Range Primitive Area and has minimal values at risk, therefore, is in monitor status.

Two other fires in Greenlee County – the Jump Fire (200 acres) in the Clifton Ranger District, and the Alder Fire (968 acres) approximately 3.5 miles northwest of the Jump Fire in the Alder Creek Drainage – were both started by lightning on Aug. 20 and 22, respectively, and are burning in steep, rugged terrain in remote locations with minimal values at risk, therefore, they are both in monitor status.

The Cow Canyon Fire, approximately four miles southeast of the Blue Camp in the Blue River Drainage, has grown to approximately 248 acres. The fire started on the north side of Lanphier Canyon and moved to the south crossing the canyon just to the west of Cashier Spring.

Franz Cabin and Corral are located to the east of the fire near Franz Spring. The fire will be monitored for movement to the east that may impact the cabin. Firefighters created a helispot near the cabin during the Whoa Canyon Fire in early July and will utilize that, if necessary, to help protect the cabin and corrals.

The Apache-Sitgreaves National Forests issued a temporary trail closure order effective Sept. 8. The following trails are closed for public health and safety due to wildland fire activities along the trails:

Lanphier Trail (#52) at the trailhead at the junction of National Forest Service Road (NFSR) 281, following the trail to the southeast, until it meets Cow Flat Trail (#55).

South Canyon Trail (#53) at the trailhead at its junction with NFSR 281, following the trail to the southeast, until it meets Cow Flat Trail (#55).

Smoke may be visible east of U.S. Highway 191 on the Alpine and Clifton Ranger Districts, west of Saddle Mountain, and near the town of Glenwood, New Mexico. Smoke-sensitive individuals and people with respiratory or heart disease are encouraged to take precautionary measures. Information on air quality and active prescribed burns can be found on the Arizona Department of Environmental Quality’s webpage: https://azdeq.gov/.