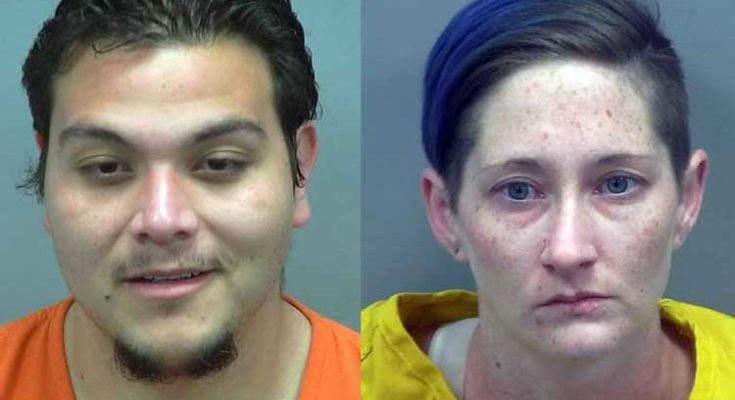 Contributed Photo/Courtesy GCSO: Paul Garrobo, left, and Elizabeth Gilbert were booked into the Graham County Adult Detention Facility after using a credit card at Walmart they found in a wallet that was lost in the parking lot.

“There ain’t no such thing as a free lunch.” – popular adage

SAFFORD – Some people use their credit cards with disregard as it can seem like found money until the bill comes at the end of the month. A man and a woman jumped at a crime of opportunity when they found a lost wallet in the Walmart parking lot April 9 likely thinking they would never have a bill, but instead, their bill will be much higher and could include losing their freedom.

Walmart surveillance footage led officers to Garrobo after the victim told police that he believed he had lost his wallet in the Walmart parking lot while assisting his mother-in-law with her shopping the evening of Monday, April 9.

The victim said after realizing his wallet was missing, his wife checked their bank account and noticed two pending purchases from Walmart totaling $146.68 and another one from Walgreens for $15.26. The victim denied making the purchases and said whoever found his wallet likely did so.

The officer then checked the security footage at Walmart and saw the victim lose his wallet in the parking lot and a woman, later identified as Gilbert, pick up the wallet and walk into the store with it. Gilbert then took the wallet into the women’s restroom, where the officer later located it in the trash can.

After emerging from the restroom, Gilbert is seen on surveillance video using a credit card to purchase items and then using it again to purchase a prepaid Visa debit card Garrobo scanned at a self-checkout. The purchases match up with the disputed purchases the victim reported.

By identifying Garrobo on the surveillance video, officers located the couple Thursday, April 12 and booked them into jail.