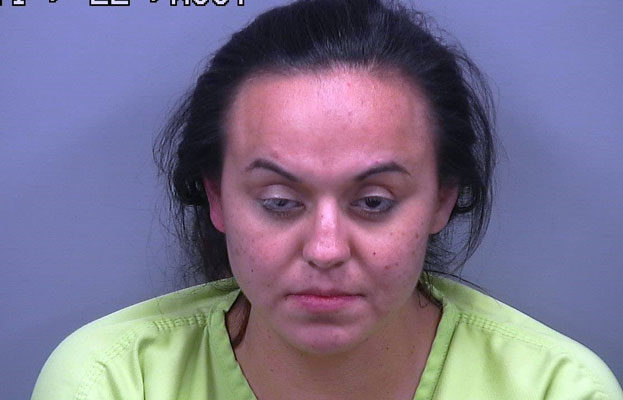 Contributed Photo/Courtesy GCSO: Cassandra Medina was booked into the Graham County Jail on drug charges, resisting arrest, and DUI-drug after allegedly driving impaired with 2.7 grams of meth in her possession.

SAFFORD – Cassandra Lucia Medina, 29, of Thatcher, was arrested and booked into the Graham County Jail after an officer reportedly witnessed her make a late night drug buy Monday, May 20.

Medina was later found in possession of 2.7 grams of methamphetamine and was booked on charges of possession of a dangerous drug, possession of drug paraphernalia, resisting arrest, and DUI-drug.

According to a Safford Police report, an officer radioed to another officer on patrol that he had witnessed what he believed to be a drug transaction involving a silver Nissan that had just left a residence known for trafficking in stolen property and drug dealing. The officer advised that he saw a man approach the driver’s side for a brief time and then the vehicle left the area.

The officer on patrol caught up to the Nissan, which initially accelerated quickly and turned onto 9th Avenue from 20th Street. The officer noted seeing the Nissan stop past the white stop line at the intersection with El Paso Boulevard and initiated his emergency lights and siren. However, the Nissan continued to head westbound on El Paso and was swerving heavily while traveling at about 21 mph, according to the officer’s report. The Nissan then stopped just before 12th Avenue in front of a residence.

The officer reported that the driver, later identified as Medina, was confrontational about the traffic stop and initially refused to exit her car.

Medina eventually got out of the car on her own and consented to perform DUI field tests, which she failed. During the tests, the officer noticed a plastic baggie on the ground that had not been there before and realized it had meth residue. A second officer at the scene advised he had actually seen Medina drop the baggie on the ground, but she denied doing so.

Medina was told she was under arrest but she resisted and had to be forcibly taken to the ground and handcuffed, according to the officer’s report. A search afterward yielded $340 in cash and another empty meth baggie on her person. A search of the car resulted in locating a glass pipe with meth inside, two torch-style lighters and a baggie with 2.7 grams of meth. Also located in the car was a new microwave oven and several women’s clothing with the price tags and store stickers still attached.

The car was towed from the scene and after Medina’s blood was taken for testing purposes she was booked into the Graham County Jail.