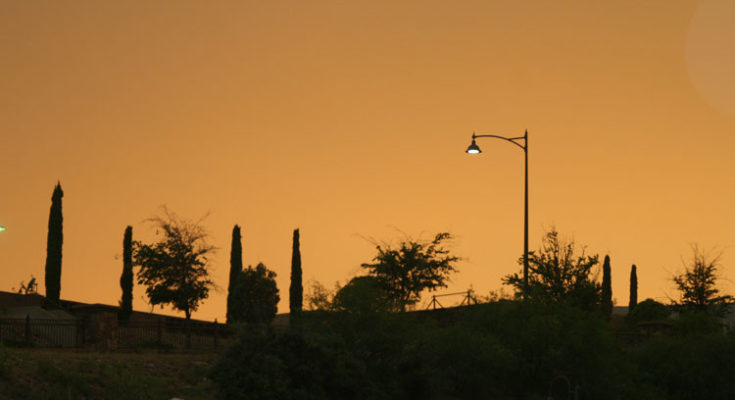 Walt Mares Photo/Gila Herald: Smoke from the Bringham Fire at times causes a major change in sunsets seen from Morenci.

APACHE-SITGREAVES NATIONAL FOREST – As the Bringham Fire has grown to 17,872 acres, so has its containment.

Fire managers have increased the containment of the Bringham Fire from 5% to 20% to reflect the hard work done by firefighters along the southern end of the fire and portions of U.S. Highway 191. Firefighters continue to patrol the containment lines and keep a watchful eye out for any fire activity. Weather will become hotter and drier over the weekend and into next week, with increasing temperatures and no chance for precipitation. Today, strong winds will continue to test the containment of the Bringham Fire with possible gusts up to 25 miles per hour. Skies will remain mostly clear, although the Bringham Fire area may be impacted by smoke from other large fires in the region.

Numerous management action points have been established throughout the fire planning area to signify when and where the next action is needed. If the fire was to reach any of these points, a corresponding pre-planned action would be initiated. Firefighters are continuing to mitigate the threat of the fire crossing U.S. Highway 191 by scouting for renewed fire activity, chipping cut limbs and other vegetation, and preparing to burnout if necessary. Crews are focusing on those structures in close proximity to the fire’s edge and prioritizing their protection. Although spot fires have occurred across Strayhorse Creek, aircraft were used to limit any further spread. If the fire becomes established in Strayhorse Canyon, it may prompt the need to conduct burnout operations to remove excess fuel in the path of the advancing fire.

For the protection of the public and our firefighters, U.S. Highway 191 is closed in both directions between Milepost 189 (just past Juan Miller Road) and Milepost 225 (Blue Vista). This closure will remain in place through June 21 and may be extended as firefighters continue to secure the road corridor. Fire managers and local Forest Service personnel are currently working together to identify when it would be safe to reopen Highway 191 to the public. At this time, fire personnel are continuing to use Highway 191 to transport crews, supplies, and equipment to and from the incident. Members of the public are advised to drive with caution and leave roadways clear for emergency vehicles and equipment to pass. More information can be found at https://azdot.gov/adot-news/us-191-closed-eastern-arizona-mountains-due-bringham-fire.