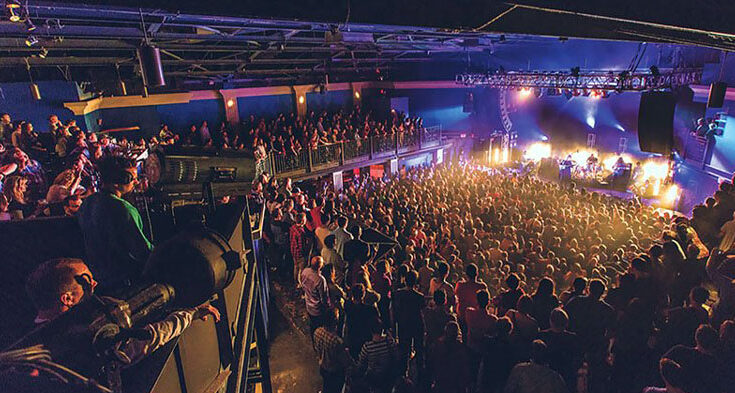 Photo By John Shore/Courtesy I.M.P.: Unlike other businesses that could reduce capacity or pivot to delivery, theaters and concert venue, like Washington’s 9:30 Club here, were completely shut down by the pandemic. A $16 billion relief program that was supposed to help those businesses has gotten off to a disastrous start, and venue operators say that has left them in desperate need of aid.

PHOENIX – Arizona business owners said a federal program aimed at helping theaters and concert venues shuttered by COVID-19 “has been a disaster,” taking until this month to deliver the first grants from a fund that was approved last year.

Only one Arizona business has received a grant so far from the Shuttered Venue Operators Grant, a $16 billion fund administered by the Small Business Administration.

And Arizona is not alone: As of last Wednesday, the SBA had approved just 90 of the 14,020 applications it has received under the fund and distributed $127.9 million, money that business owners said was “desperately needed five months ago.”

“We’re all trying to rebuild, and if this money doesn’t start flowing businesses won’t come back,” said Bonnie Schock, executive director of the Fox Tucson Theatre.

When it began reviewing applications on May 4, SBA set a goal of reviewing all “first priority” applications – from businesses that reported losing 90% of their revenue or more over the past year – by June 9. But as of Wednesday, the agency had approved less than 1% of the applications, had thousands under review, and another 9,269 that have yet to get a first look.

His organization joined six others who wrote SBA Administrator Isabella Guzman on Thursday, demanding that the agency “immediately fully fund all … eligible entities and to immediately resolve interagency issues that have proven a barrier to funding for SVOG applicants who are suffering deeply.”

“The SBA, whose sole purpose is to help small businesses, is demonstrating a lack of urgency and ability to execute this desperately needed emergency relief program,” said Jennifer Grogan, a NIVA member. “The SBA’s delay is actually driving businesses under.”

Chilton said that in the meantime venue operators in Arizona have had to take drastic measures to stay afloat.

“The reason all venues haven’t closed is because they’re doing things they normally wouldn’t do to stay in business, such as selling cars and taking out mortgages,” he said.

Requests for comment were not immediately returned by SBA officials, who pointed instead to the agency’s Wednesday report on the progress of the program.

Among the 90 approved applicants, 65 were performing arts organizations or live venue operators, 19 were movie theater operators, four were talent representatives and two were theatrical producers. Awards went to businesses in 32 states, with the most going to California, where 16 applicants got a total of more than $20 million.

The program calls for $2 billion to be reserved for businesses with 50 workers or fewer. About half of the total awarded so far went to small businesses, which accounted for 79 of the 90 recipients.

The SBA did not release the names of the grant winners, just numbers. The one recipient in Arizona was awarded just over $2.5 million, close to twice the national average award of $1.42 million.

Rep. Greg Stanton, D-Phoenix, said in a letter Wednesday to Guzman that he was “in disbelief that nearly six months” after the program was approved, so few applications have been awarded.

“Today a venue operator in my district wrote to me, ‘We are past our breaking point. We can’t hang on any longer,’ adding that only a single venue in Arizona has received aid,” Stanton wrote. “Please tell me, what are my constituents on the verge of closing their businesses forever supposed to do?”

Schock said that, unlike other businesses that were hit hard by the pandemic, theaters and concert venues did not have the option to deliver takeout or open at limited capacity. Live entertainment businesses have been “100% closed for 15 months.”

She said that the Fox Tucson Theatre is a historical nonprofit that has managed to stay afloat due to generous donors who have helped fund barebone operation costs of about $50,000 a month. But other venues do not have that luxury, Schock said, with no capital to pay their monthly expenses.

Schock said the SBA’s delay in releasing funds is perplexing for an industry that has been “completely crippled” and is “vital to our communities.”

“These funds were intended to save our businesses, and here we are six months later and no dollars are flowing,” she said. “We have to have a solution, and we have to have it now or else we will lose these businesses that are vital to our communities.”