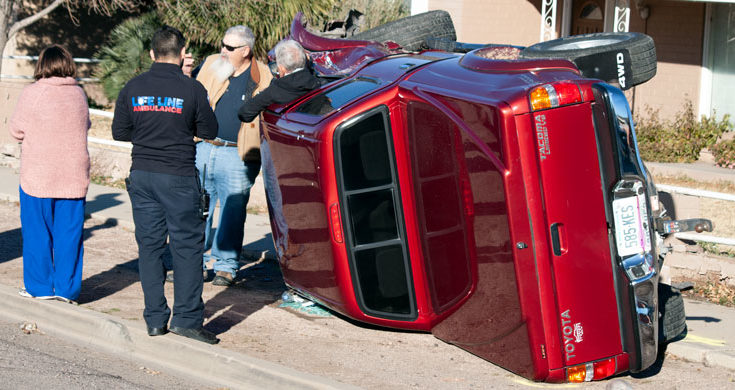 Jon Johnson Photo/Gila Herald: The occupant of a red Tacoma pickup truck that ended up on its side after a collision Monday morning speaks with a Thatcher detective and officer while awaiting extraction. The driver was found at fault for the crash and was given a citation.

THATCHER – An early-morning collision closed the westbound lanes of U.S. Highway 70 at High School Avenue after a green pickup truck towing a trailer collided with a red Toyota Tacoma pickup truck that pulled out in front of it. Traffic was diverted to the middle turn lane around the scene.

According to the damage to both vehicles, it appeared that the green pickup truck collided with the front passenger side of the Tacoma. Thatcher Police Chief Shaffen Woods advised the Tacoma was northbound on High School Avenue when it pulled out in front of the older, green truck. The driver of the Tacoma was found at fault and was given a citation for failure to yield from a stop sign.

The area is where school children cross the highway and is in the 15 mph school zone. While school has restarted for the third quarter, the crash apparently occurred after the school zone signs were removed. The signs are replaced when school gets out in the afternoon.

As of 9:09 a.m., a male occupant was still inside the Tacoma, which had flipped onto its side and came to rest on the northern sidewalk just west of High School Avenue. The green pickup showed heavy front-end damage and was located in the farthest westbound lane and onto the southern lane of High School Avenue with its trailer still attached.

While the collision looked severe, there didn’t appear to be any serious injuries. A female involved in the crash, while visibly shaken, appeared to be uninjured. Woods advised those involved only had minor injuries that included bumps and bruises.