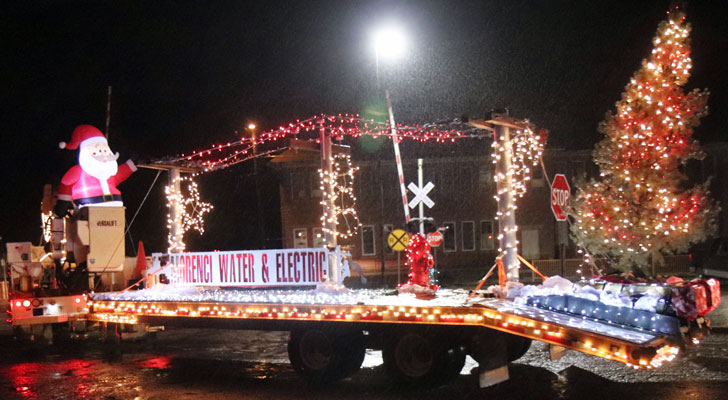 CLIFTON – “A little water is not gonna stop us,” retired Town of Clifton employee Anthony Ortega said. And, it did rain on the parade.

The 2022 Clifton Festival of Lights, as well as the parade, were held, despite steady rain throughout the day. Nearby parking lots overflowed with vehicles.

Visitors traversed Chase Creek waters running steadily out of its walled banks in the streets, to attend the event. Anticipated crowds may not have been fully realized, but residents and non-residents alike still attended.

A cakewalk had multiple winners as well.

The top three of 10 essay contest winners, writing on the local event, selected by the festival committee, were recognized and crowned Mr. and Miss Merry Christmas, and princess in the flesh of Morenci seniors Elijah Leyba, Isabelle Shock, and Gianna Chavez, respectively. Scholarships will be awarded during the end-of-school May gathering. A scheduled reading of the essays was not held.

In place and readied but not used was a musical performance stage, fitted with covered speakers. A live band did not materialize and no one stepped up to play instruments or sing, and yes several performers were rained out. Attendees were not entertained by scheduled performers Kamille Bernal, Danny Twigg, Theresa, and Bella Campbell, the Morenci Pride Band drum line, or Sra Skinner. Instead, recorded music was played throughout the day to help set the wanted mood, the Christmas Spirit.

A much-anticipated parade capped the day, with at least 17 entrants participating, according to one onlooker. Another onlooker, seated underneath a covering acting as a shield from the falling rain, said both hands to count the number of vehicles going by weren’t needed. A law enforcement officer said he didn’t really know the count, as his focus was on making sure no one strayed onto the path of moving vehicles.

The event helped partakers with a return to normalcy, having not been held since the ongoing global health crisis reared its head in early 2020. However, health officials recently warned of another wave hitting eight counties in the state, including Greenlee.

The 26th Annual Christmas Festival of Lights tabbed “Home Town Holidays are here again,” concluded as it had all day, amidst a steady rain.