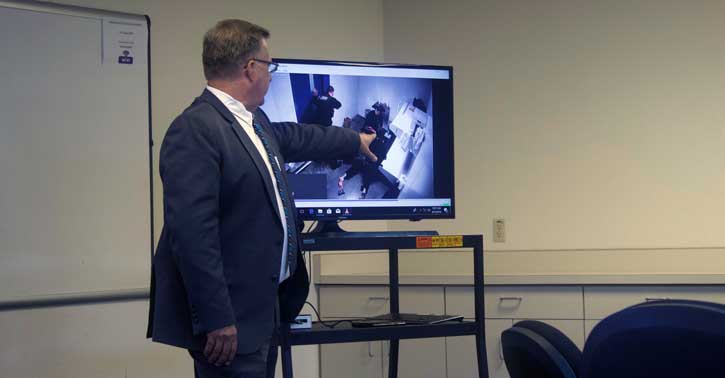 SAFFORD – With more than a decade of law enforcement experience, former Graham County Adult Detention Facility Sgt. Wendall Crandell was one of the more seasoned detention officers at the jail. After a run-in with an inmate in March, however, Crandell no longer has a job.

Graham County Sheriff P. J. Allred said while he did not enjoy terminating an officer his office will do what is best.

“I knew in becoming the sheriff of Graham County that there would be a lot of decisions that would have to be made that sometimes wouldn’t be popular to the public or others but it’s the correct thing to do,” Allred said. “And this is one of those times . . .”

The Sheriff’s Office was represented by Daryl A. Audilett of the Tucson law firm Audilett Law PC. Audilett, who has been handling law enforcement cases for more than 30 years, told the commission that the jail is in charge of officer and inmate safety and that it should not foster the mentality of physical confrontation as professed by Crandell.

The issue of Crandell’s firing revolved around the handling of a situation that occurred March 6 with then inmate Robert Lee Lafler, 35, who was awaiting adjudication for his role in the shooting of Gary Hess in December 2017. Lafler later pleaded guilty in April and signed a plea agreement admitting to misconduct involving weapons – a Class-4 Felony – and an amended charge of discharging a firearm at a residential structure – a Class-2 Felony. According to witness testimony, Lafler was known to have previous altercations with corrections officers while in prison and had been a difficult inmate at the jail, but did not have any altercations at the Graham County facility.

During the incident, Lafler was seen using a towel to work out that was draped over a metal bar above the inmate’s bunk in violation of jail policy. While the jail allows inmates to work out, they are not allowed to use the towel on the bar because the welds have been found to break causing injury.

Detention Officer Mares noticed Lafler using the towel and took it from the cell. When doing so, Lafler retreated to his bunk as instructed by Mares.

Lafler, believing Mares was telling him he couldn’t work out, started to have an animated conversation with Mares, who re-opened the door to better speak with Lafler.

During this interaction, a control officer noticed the situation and informed Crandell that he should probably respond, which he did along with officer Hoopes.

As seen in the jail video of Lafler’s cell, Crandell quickly moved to handcuff Lafler and a struggle ensued between Lafler and Crandell, Mares, and Hoopes, in which Lafler was pepper sprayed twice and hit with a direct-contact TASER stun. Lafler was then dragged out of the cell and placed into a restraint chair.

Crandell had been previously disciplined twice for other issues not relating to his interactions with inmates. After the incident, Hoopes, who was on probation, was terminated and Mares, who was a relatively new hire, was placed on probation. Crandell was placed on paid administrative leave until the Sheriff’s Office’s investigation was completed. He was terminated in July and appealed his case to the Merit Commission.

In addition to the Lafler tape, the Sheriff’s Office also showed the commission two body camera footage tapes of Crandell’s crew doing cell extractions on inmates who appeared to be not resisting being forced to the ground and dragged out of their cells instead of just being handcuffed and walked away.

Testifying for the Sheriff’s Office, Graham County Undersheriff Jeff McCormies said the department didn’t have an issue with the use of force after the initial attempt to handcuff Lafler, but rather Crandell was terminated for what he didn’t do, namely use verbal commands to diffuse the situation.

McCormies said Crandell had his mind made up before arriving at the cell that he was going to “put his hands on” Lafler and do a cell extraction. McCormies was mystified at what that would accomplish since Lafler was already in an isolation cell by himself (and would be returned to the same cell about 1.5 hours later) and questioned why Crandell would not have just instructed Lafler to return to his bunk and then close the door.

In his defense, Crandell said that the way he was trained by the department was to first place the inmate in handcuffs and then talk. He said he believed Lafler to be an immediate threat and for the safety of the officers and Lafler, he decided to first put him into handcuffs.

Crandell, who has accolades from his fellow detention officers and had their full support, had current and former jail employees testify on his behalf on how they handcuff inmates for cell extraction. One employee, Sgt. T.J. Perez, testified he would have done the same thing, however, when questioned admitted that he would have first verbally told the inmate to get on the ground to be handcuffed.

Jail Commander Tim Graver questioned Crandell’s take on the training protocol and said while the Tactical Response Unit’s (TRU) training does include forcible handcuffing where inmates are “escorted to the ground”, verbal commands are always given first. He added that even in a riot situation the TRU team will advise any inmates who do not want to be involved in a forced extraction to comply with verbal commands. Crandell was part of the TRU team.

Crandell said that the commission couldn’t see everything that was going on with just the camera footage and that the difference in opinions in how he handled the situation was simply a training issue. He said, ultimately, he just wanted his job back and that he could change the way he handles various situations.

“It’s not my objective to go in there and slam everybody,” Crandell said. “I deal with a lot of situations verbally, a lot. I don’t go hands-on very often – three or four times a year. I did twice in one day but I can’t dictate that.”

He said he could be valuable to the department to help train the number of new hires on how to handle situations now that he has been through this process.

“I feel like this is kind of an eye-opener for me a little bit,” Crandell said. “It has given me some other avenues to look at. I just want to volunteer to do whatever I need to do fix the situation because I wasn’t doing this stuff to be mean or anything . . . I know there’s a gap in training. I know there’s a gap in my understanding of use of force.”

“There are officers (who) do work like I do,” Crandell said. “Nobody really knows what to do anymore. Everyone’s kind of afraid like ‘Can I spray them, can I put hands on them, can I do this?’ They don’t know with what they can get away with.”

During a discussion, some board members sympathized with Crandell and said they could see it being a training issue, but, ultimately, it was his decade of experience in law enforcement that caused them to lean the way of supporting the termination. If he had been a fresh recruit, board members advised, their decision would likely be different.