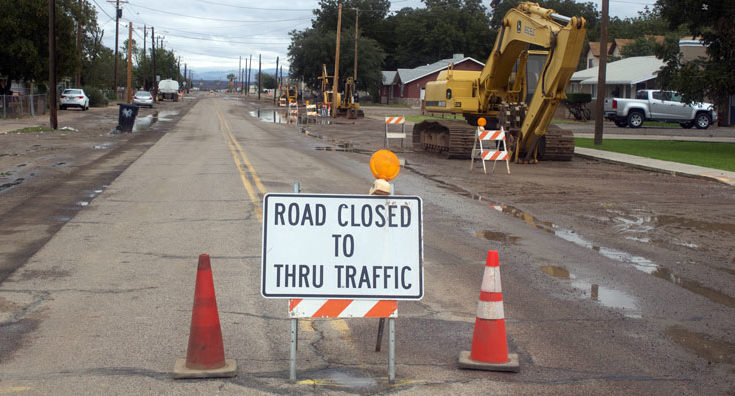 THATCHER – The artist’s conception of a newly rebuilt Church Street with its roundabout at Third Avenue, and a wider street with asphalt from curb to curb looks like a beautiful road. However, the process to get to that point is gritty, tedious, and time-consuming.

The current state of Church Street is slightly above a quagmire as the recent rains have muddied the sides and utility construction has opened up the road.

Last month, Thatcher Town Manager Heath Brown gave disheartening news regarding an increase of roughly $500,000 to the project, taking it from the previous cost estimate of $2.3 million and change to $2.9 million. At that time, Brown said he would try to see if SEAGO would be able to come up with the additional funds.

At the Thatcher Town Council’s Monday night meeting, Brown gave encouraging news that SEAGO has indeed given their blessing to move forward with the project and that it would gather the additional funds from its coffers and/or other like organizations throughout the state.

“We shouldn’t have a problem getting that money and should have it finalized by the end of the month,” Brown said.

In addition to the street renewal and roundabout, the project will also include new sidewalks, curbs, and gutters and will feature parallel parking and bicycle lanes on both the southern and northern sides.

Thatcher has relocated the electrical power along Church Street ahead of the street renewal project and is just waiting on a cable provider to relocate its lines before removing the utility poles.

The water project, which was scheduled to take place from July to December ahead of the rebuild project, is being undertaken by CNB Excavating, which has been removing parts of the street to replace more than one mile of 12-inch diameter pipe and 1,615 feet of 4-, 6-, and 8-inch diameter water mains.

According to Brown, the contractor hasn’t performed much work and the water main project is lagging due to conflicts with additional utilities and the depths the water main must be placed.

“They’re trying to work out what the change order is going to cost,” Brown said. “They haven’t done much in the past two or three weeks.”

Brown said he has reached out to Safford City Manager Horatio Skeete to offer any help Thatcher could provide to speed up the resolution since the water project timeline is essential for Thatcher to keep its timeline for its street project.

For now, residents along Church Street will simply have to continue to drive through the construction area with heavy machinery set on the shoulders and muddy roads mucking the area. But in the end, the finished product should be worth the time residents have had to endure the situation during construction, according to Brown.