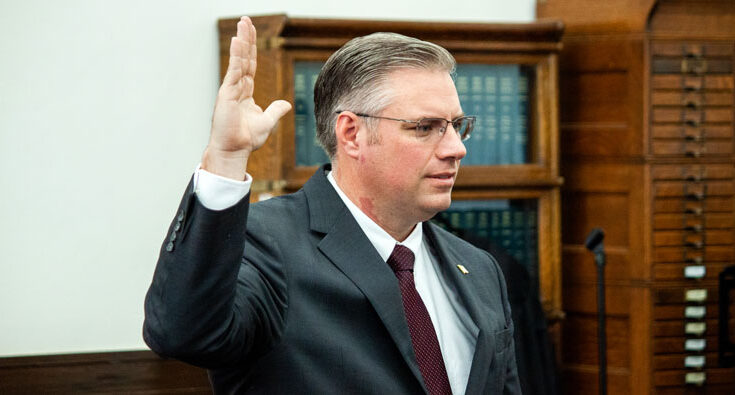 The ceremony took place in a packed historic Greenlee County Superior Courtroom and was attended by various dignitaries, friends, family, and co-workers.

Judge Ford served as the Greenlee County Attorney previous to running for and being elected judge.

Former Greenlee County Attorney Derek Rapier (who handpicked Ford as his successor in the Attorney’s Office) spoke at the ceremony and talked about outgoing Judge Stauffer, who he spent most of his career practicing in front of.

“She is outstanding,” he said. “Her stature among her peers is second to none . . . Judge Stauffer, prior to taking the bench, had, I think without question, the most successful private practice in Greenlee County in probably 50 years. She was the go-to attorney – particularly in the area of family law. Parties would race to get to her first. That’s a great compliment to her stature in our community, and I’ve appreciated the legacy she has left.”

Rapier then spoke about Ford and said he was surprised with the quality of attorney Ford is.

“I was not a top-10 percent kind of person in law school, Jeremy Ford was,” Rapier said. “And those kinds of folks are highly recruited by the largest and most respected law firms in any state coming out of a prestigious law school like ASU.”

Prior to swearing Ford in, Judge Stauffer told Judge Ford the four most important things that “belong to a judge; take her courteously, answer wisely, to consider soberly, and to decide impartially. My best to you.”

After the administering of the oath of office, Judge Ford donned his judge’s robes with the assistance of his wife, Wendy, whom he attributed with having the idea of moving to Greenlee County in the first place.

Judge Ford also thanked his mother and grandmothers, and his wife, Wendy, for dedicating their lives to raising large families and helping others be successful.

Judge Ford was presented with two nameplates, one for the courtroom and one for his office, and two gavels, one from Judge Stauffer that might get used, and one from Greenlee Investigator Eric Ellison and the County Attorney’s Office that will likely be just for show.

“It’s really hard to understand Greenlee County by driving through it,” Judge Ford said. “You may see a wonderful hole in the ground, you may see some great farms, and you may ask, ‘why would people want to live here?’ I believe it’s beautiful, but I’ve always said Greenlee County is about the people. And until you stay here, and until you know the people, you’ll never truly understand Greenlee County. Because this is where wonderful people are. This is where wonderful community is. And I am truly honored to have the opportunity to serve here.”