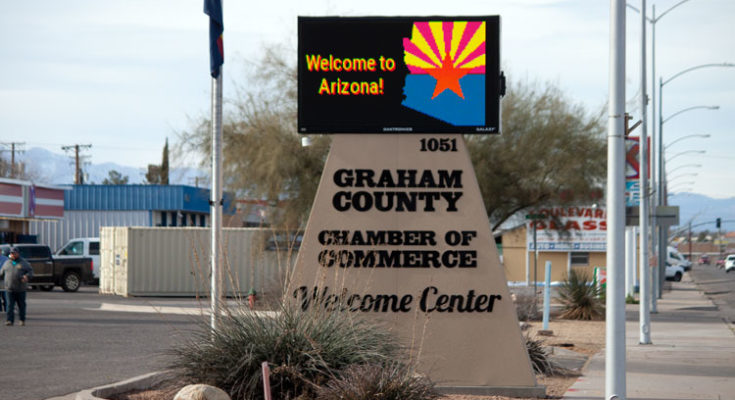 Jon Johnson Photo/Gila Herald: The Graham County Chamber of Commerce updated its sign with a new video board.

SAFFORD – The Graham County Chamber of Commerce has opened the new year with an updated video board for a sign, hired a new executive director, and has named four new board members.

The Chamber’s new digital sign – a Daktronics Galaxy – was purchased from CMI Signs and installed by the city of Safford, which partnered with the Chamber on the project.

CMI co-owner, Laura Tolman, who also currently serves as the vice-chairman for the Chamber Board of Directors, said the project was the most recent result of a total update of the chamber instituted by former executive director Patrick O’Donnell.

“It definitely gives the chamber building and the Chamber of C in general an updated, 21st Century look to it instead of that really old wooden sign that used to be there,” Tolman said.

City workers – with assistance from its inmate labor force – put the finishing touches on the sign Dec. 19. Workers had to dig a trench through the C parking lot to deliver electrical power to it.

The LED sign, which is full color and can also play video, is used to promote the area and local events, and can also be used by chamber members to advertise their businesses. The sign is also dark skies compliant, and is dimmed during nighttime hours and turned off at 11 p.m.

Tolman said the next step will be for the C to update its website and be more involved with social media.

Along with a new, updated sign, the Chamber named Micah Windsor as its new executive director. Windsor replaces former director Patrick O’Donnell, who resigned at the request of the board. Windsor is set to begin her tenure Jan. 14.

Four new members were also selected to the Graham County Chamber of Commerce Board of Directors. The new members include David Farar, of Kempton Chevrolet; Doug Gardner, of Velocity Builders; Corina Pino-Reyes, of Valley Telecom; and Nick Tellez, of La Paloma Restaurant.

The board will elect a new president and other seats at its Jan. 8 meeting.