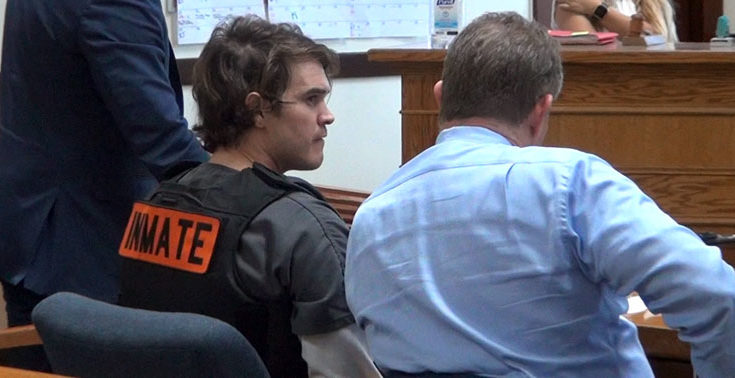 SAFFORD – Emotions ran high inside the Graham County Courthouse on Thursday, as Graham County Superior Court Judge Michael D. Peterson sentenced Chris James Chacon, 31, to a term of 45 years in prison. The sentence was the maximum allowable term under Chacon’s plea agreement, which Judge Peterson also assisted with as the settlement conference judge in the case.

Even with credit for time already served and one day off for every seven served on the lesser charges, Chacon will be a senior citizen of the age of 73 before he is scheduled to be released from prison.

On Thursday, the courtroom was packed with supporters of the victim and her family as the Unbroken Motorcycle Club out of Phoenix was joined by the Wild Bunch motorcycle riders of Safford to sit with the family and show their support. A number of law enforcement members were also on hand to view the proceedings and a large security force was present to protect the defendant as well.

Unbroken MC Vice-President “Tek” spoke with the Gila Herald after the sentencing.
“It seems like it was a good outcome for the family,” Tek said. “It was something they were looking forward to have that next step to move forward in the healing journey. We’re glad to be out here and show the support.”

The victim’s mother read a statement in court she said the victim wrote.

The victim’s mother then spoke from her own heart.

Chacon’s younger sister spoke on his behalf and said she always looked up to her brother while growing up and that he was her protector.

“Chris was always there to make sure I was ok,” she said.

“Chris has been nothing but a positive influence on me,” she continued. “Chris has always strived for perfection and has always been a law-abiding citizen . . . Bad mistakes, he’s made a few, but has always taken them as lessons and corrected them immediately . . . My brother is a very strong individual who has one of the kindest and gentlest hearts . . . I know that this mistake is one that my brother can overcome just as he has done with others in the past.”

Graham County Chief Deputy County Attorney L. Scott Bennett classified Chacon’s actions as much more abhorrent than a simple “mistake” and that Chacon cared more about his own sexual gratification than he did for the law, common decency or the harm it inflicted upon the young child.

“Judge, this wasn’t ‘oh no I made a mistake; oh no I can’t believe what just happened.’ This was the systematic abuse, the continuous abuse, of a 9-year-old. Someone who likely was in agony every time she was victimized. This is the stuff that keeps me up at night judge, and I hope the court will agree with me.”

Bennett then asked for the maximum sentence of 45 years and said that Chacon needed to be removed from our community.

“Judge, 45 years – I don’t even know if that’s a drop in the bucket of what’s deserved,” Bennett said. “But that’s the plea, that’s the most the court can do and that is what  I am imploring the court to do . . . I want you to think, judge, about that little girl and her life that has been forever altered because he wanted sexual gratification.”

Chacon’s attorney, Ryan Huffman, fo the St. Louis Law Firm out of Tucson, argued that Chacon was a law-abiding citizen who needed therapy and not an extended prison sentence and argued for the minimum of 20 years. He said 20 years “seems like a lifetime” for many.

“With the nature of Mr. Chacon’s crimes, he is not going to be in general population,” Huffman said. “He’s not going to be playing nice with the guys. He’s going to spend a lot of time alone reflecting on what he had done.”

Huffman referenced his medical expert’s opinion and said while Chacon needs treatment he is at a low risk to offend again if he gets said treatment and he will be monitored closely as a sex offender on lifetime sexual offender probation.

“He’s not going to be a danger to society when he returns out to the free world,” Huffman said.

Chacon addressed the court and apologized to the victim and her family.

“I want to get healthy and I want the treatment that I need to figure out why this happened so I never hurt anyone else again,” Chacon said. “I’ll do whatever it takes.”

Judge Peterson weighed the aggravators and mitigators and explained to Chacon how he came about his sentence.

“Given her very young age and the length over which this abuse was perpetrated, I give that the greatest weight possible,” Judge Peterson said. “I do not know if she will ever overcome the victimization that you did to her . . . This was not a mistake. This was dozens, probably hundreds of mistakes over and again.”

With credit for 221 days already served and given one day for every seven served on his 18-year sentence, Chacon will be imprisoned for roughly the next 42 years and will be 73 years old when he is released from prison.

Upon his release, he will be placed on lifetime sexual offender probation for his remaining counts, each which carries a sentence of 5 to 15 years in prison if he fails on probation.