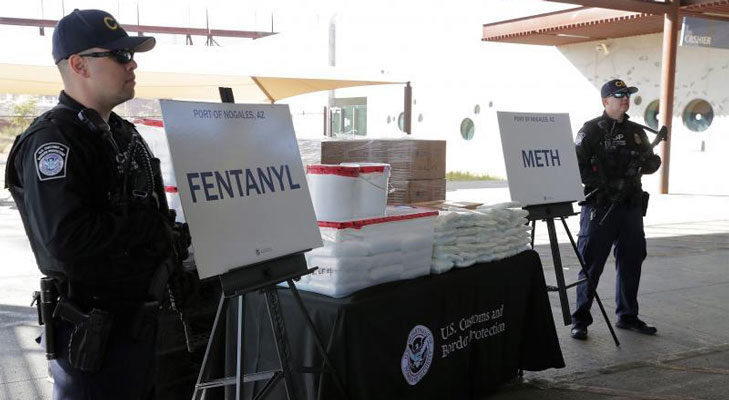 Contributed Photo/Courtesy U.S. Customs and Border Protection: The seized fentanyl and methamphetamine was displayed for reporters during a press conference Thursday morning.

NOGALES – U.S. Customs and Border Protection officers at the Nogales Commercial Facility seized nearly $4.6 million in fentanyl and methamphetamine totaling close to 650 pounds on Saturday from a Mexican national when he attempted to enter the United States through the Port of Nogales. The seizure is the largest seizure of fentanyl in CBP history. The methamphetamine seizure represents the third largest at an Arizona port.

CBP Officers discovered more than 400 packages of drugs concealed within a special floor compartment of a trailer that was laden with cucumbers, driven by a 26-year-old truck driver. Following an alert by a CBP narcotics detection canine, CBP officers seized nearly 254 pounds of fentanyl with a value of approximately $3.5 million and almost 395 pounds of methamphetamine valued at $1.1 million.

“I want to express my gratitude to the CBP officers involved in this case and Nogales personnel who selflessly perform their duties with dedication, vigilance, and professional even during a funding hiatus,” said PD Humphries. “Opioids pose a real danger to every community in America and are having fatal consequences across our nation. This past weekend our CBP officers were able to stop an enormous amount of these deadly narcotics from hitting our streets.”

The driver of the vehicle was arrested and turned over to Homeland Security Investigations (HSI), who charged him with two counts of 21 USC 841, possession with intent to distribute and is currently in federal custody.

“This case clearly shows that HSI’s and CBP’s collaborative efforts continue to have an impact, as those attempting to smuggle illicit drugs are stopped at the border,” said HSI Special Agent in Charge Scott Brown. “These efforts exhibit the combined resources of law enforcement agencies’ resolve to combating these deadly drugs from entering our communities.”