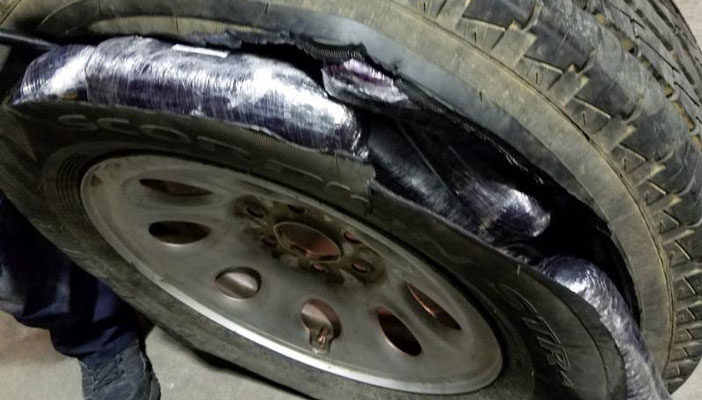 Contributed Photo/Courtesy U.S. Customs and Border Protection: Officers at the Port of Nogales discovered a combination of heroin and fentanyl inside of a spare tire. That and three other drug seizures totaled more than $1 million worth of drugs seized on Tuesday, Oct. 8.

Officers at the Port of Naco referred a 37-year-old Naco, Arizona, man for additional inspection of his Volvo sedan, as he attempted to enter the U.S. through the port early Tuesday morning. The search of the vehicle led to the discovery of nearly 70 packages of drugs, which were determined to be nearly 77 pounds of marijuana, worth in excess of $23,000.

Officers at the Port of Douglas referred a 35-year-old Douglas woman for further inspection of her Chevy truck, as she attempted to cross back into the U.S. through the port on Wednesday morning. After a CBP narcotics detection canine alerted to a scent it is trained to detect, officers removed nearly 50 packages of drugs from within the vehicle’s back seat. The packages contained nearly 49 pounds of marijuana, worth almost $15,000.

Earlier that morning, officers assigned to the Dennis DeConcini Crossing in Nogales referred a 45-year-old Mexican national man for an additional search of his Chevy sedan as he attempted to enter the U.S. through the port. The search led to the discovery of more than 60 packages throughout the vehicle. The contents were determined to be just more than 62 pounds of meth, worth almost $56,000.

That evening, officers at the DeConcini Crossing selected a 45-year-old Nogales, Arizona, man for an additional search of his Chevy truck as he attempted to enter the U.S. through the port. A positive alert by a CBP canine led to the removal of nearly 50 packages from the spare tire, that were determined to be a combination of heroin and fentanyl. The heroin weighed just less than 81 pounds, worth more than $922,500; while the fentanyl weighed just more than 2.5 pounds, worth over $27,000.

Officers seized the drugs and vehicles, while the subjects were arrested and then turned over to U.S. Immigration and Customs Enforcement’s Homeland Security Investigation.