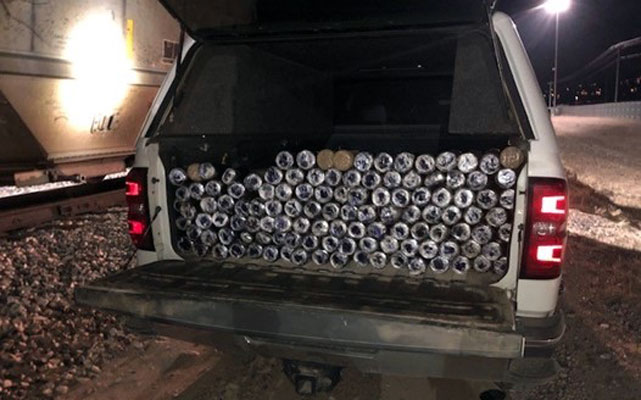 Since February 1, CBP officers have accounted for more than 25 seizures resulting in 440 pounds of methamphetamine, 385,000 fentanyl tablets, 84 pounds of heroin, and nearly 13 pounds of cocaine. Also included was the seizure of an AR-15 assault rifle, a pistol, and 337 rounds of ammunition from a 28-year-old man who was wanted for murder.

The seizures encompassed all facets of port operations from pedestrian, to vehicle primary, secondary, outbound inspections, cargo, and rail cars.

The concealment methods varied from spare tires, the dash of vehicles, to internal body carriers.  In one case, a 42-year-old man and a 39-year-old woman, both United States citizens, attempted to smuggle methamphetamine, fentanyl tablets, and cocaine in a compartment beneath the center console of their pickup truck.

On February 10, a 41-year-old Mexican national truck driver was arrested after officers discovered over seven pounds of fentanyl tablets hidden within two fire extinguisher which was inside the cab of the tractor he was driving.

Earlier that day, officers working the rail environment discovered more than 256 pounds of methamphetamine and six pounds of cocaine concealed in a hidden compartment of a rail car.

On February 3, officers at the Mariposa crossing arrested a 28-year-old man wanted for murder out of Las Vegas.  At the time of his arrest, the man was in a stolen vehicle, in possession of a loaded AR-15 assault rifle, a loaded pistol, and numerous rounds of various ammunition. The man was turned over to local authorities for extradition to Las Vegas.

Area Port Director Michael Humphries stated, “I could not be prouder of our officers.  Even during a pandemic, they continue to keep dangerous opioids off the streets and keep our communities safe.”

Officers seized the drugs, weapons, ammunition, and vehicles, while the subjects were arrested and turned over to Homeland Security Investigations.

Federal law allows officers to charge individuals by complaint, a method that allows the filing of charges for criminal activity without inferring guilt. An individual is presumed

innocent unless and until competent evidence is presented to a jury that establishes guilt beyond a reasonable doubt.

CBP’s Office of Field Operations is the primary organization within Homeland Security tasked with an anti-terrorism mission at our nation’s ports. CBP officers screen all people, vehicles, and goods entering the United States while facilitating the flow of legitimate trade and travel. Their mission also includes carrying out border-related duties, including narcotics interdiction, enforcing immigration and trade laws, and protecting the nation’s food supply and agriculture industry from pests and diseases.