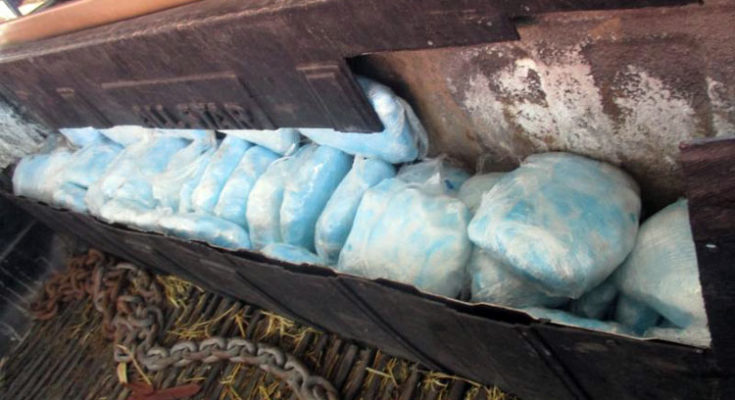 On Sunday evening, Port of Douglas officers referred a 20-year-old Tucson resident for a secondary inspection of her Jeep as she applied to enter the U.S. from Mexico. A CBP canine alerted to an odor it is trained to detect, leading officers to more than 80 pounds of marijuana, which was concealed throughout the vehicle. The marijuana has an estimated street value of more than $27,000.

On Friday, Port of Lukeville officers encountered a 34-year-old Mexican national driving a Chevy truck attempting to enter the country.  CBP officers referred him to the inspection lot and were assisted by a narcotics detection canine.  The dog alerted to a scent it is trained to detect, the subsequent search resulted in the discovery of nearly 76 pounds of methamphetamine concealed in a false truck bed wall.  The meth has an estimated street value of nearly $76,000.

On the same day, CBP officers at the Port of Nogales referred a 29-year-old United States woman attempting to enter the country through the pedestrian lanes.   The woman was referred for inspection, with a physical search resulting in almost one-half pound of fentanyl pills discovered in her groin.  The street value of the pills totaled approximately $4,000.

Officers arrested the subjects and turned them over to U.S. Immigration and Customs Enforcement’s Homeland Security Investigations, while the drugs and the vehicles were seized.