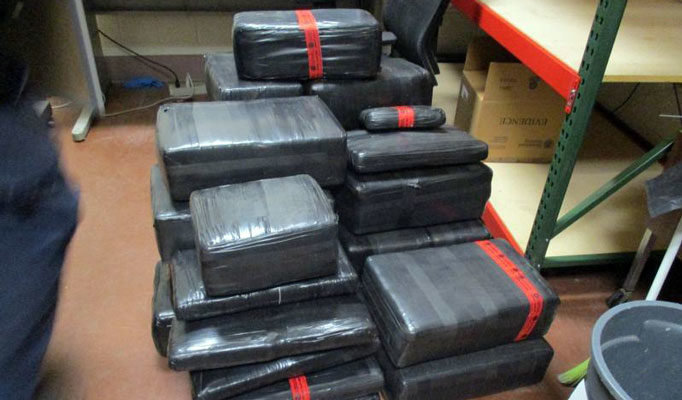 Contributed Photo/Courtesy U.S. Customs and Border Protection: Officers seized $8.8M worth of cocaine from within a water tank in the bed of a commercial truck.

Officers referred a 58-year-old Mexican male for a secondary inspection of his Ford truck as he applied to enter the United States from Mexico Thursday afternoon. A CBP canine alerted to an odor it is trained to detect, leading officers to the discovery of nearly 30 packages of cocaine within a water tank in the bed of the truck, which weighed almost 646 pounds. The drugs are worth an estimated value of nearly $8.8 million.

Monday evening, a 31-year-old Tucson woman was referred for an additional search of her GMC truck as she attempted to enter the U.S. from Mexico. A canine alert led to the discovery of more than 70 packages of drugs from inside of the fuel tank. The meth weighed nearly 74 pounds and is valued at more than $66,000, there was also three pounds of fentanyl, worth more than $34,000.

Lukeville Port Director, Peter Bachelier, lauded the efforts of his personnel. “Lukeville CBP officers are resilient by capitalizing on their enforcement posture and are committed to keeping dangerous drugs off the streets.”

Officers arrested both subjects and turned them over to U.S. Immigration and Customs Enforcement’s Homeland Security Investigations, while the drugs and the vehicles were seized.