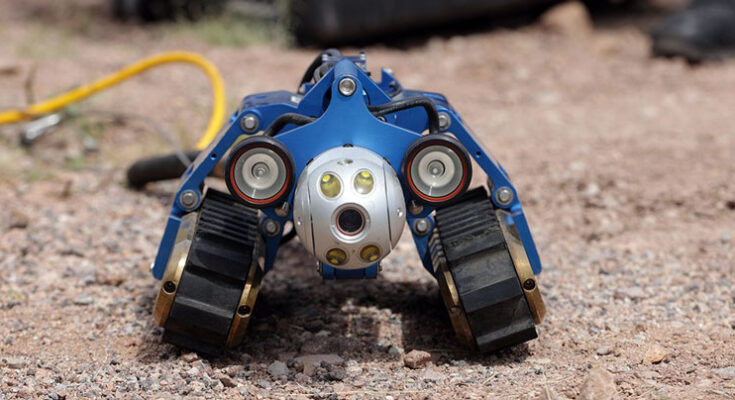 Photo By Kasey Brammell/Cronkite News: Robots used to search drug smuggling tunnels vary in size but are equipped with lights, a camera, and the ability to retract their running gear to fit into narrow spaces.

NOGALES – U.S. Customs and Border Protection agents at the Mariposa Port of Entry recently discovered 7.5 pounds of cocaine wrapped in lead and hidden in a rustic wooden tabletop. The ploy was no surprise. Arizona accounts for more than 9% of drugs that cross the land border into the U.S. from Mexico each year.

Agent Kevin Hecht has been on the job for more than 20 years, and for the past decade, he has used technology to stem the flow of illicit drugs from Mexico. His tools include integrated fixed towers; ground sensors; unmanned surveillance systems, which are similar to drones; X-ray systems, K-9 officers, and robots.

Agents’ duties include clearing drug tunnels, but robots – the one Hecht uses weighs 80 pounds – often can inspect tunnels and drainage pipes to give a first look at what’s happening before an agent is sent in – if at all.

“Anytime we can send a robot in a tunnel instead of an agent, that’s ideal, especially when it’s sewage and dirt and nasty, spiders, whatever,” Hecht said, noting that robots first clear the area for safety and check for harmful gases. “Is there people in there? Is there drugs in there, or guns in there – what’s going on?”

Technology, he said, “is a huge enhancement for the field, so it’s more a force multiplier.”

That’s a good thing considering the amount of drugs that enter the U.S. through the Tucson Sector, which stretches 262 border miles from the New Mexico state line to the Yuma County line.

In September, according to the University of Arizona, more than 300,000 pedestrians and 630,000 vehicles crossed the border in the Tucson Sector, which includes the Mariposa Port of Entry. But people aren’t all that’s crossing into the U.S. from Mexico.

According to CBP data, at least 9.2% of drugs coming over the 1,900-mile land border with Mexico during fiscal year 2021 came through Arizona.

Although technology does some of the dirty work of stemming the flow, agents say Mexican cartels are staying steps ahead of them.

“They’re getting a little bit more sneaky on what they’re doing just to counter what we’re doing,” Hecht said.

“Obviously nowadays, we’re seeing a lot more of the hard narcotics being smuggled through the desert, where the old marijuana routes were,” Regalado said. “Now they’re using it to transport hard narcotics, so we’re able to respond to all of that in a timely manner.”

And since fiscal year 2017, CBP has received more than $743 million to improve technology at the border. However, a February report showed much of those funds have not yet been spent.

Read more about a U.S. Department of Homeland Security audit of the funds and other border issues on Jan. 4 at cronkitenews.azpbs.org.