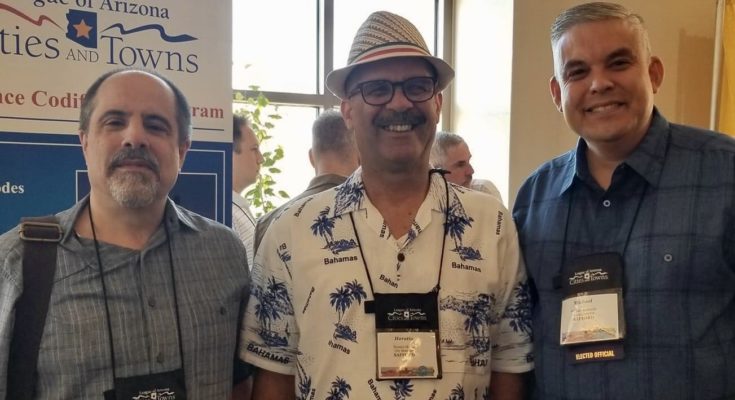 Contributed Photo: John Cassella, left, poses with outgoing Safford City Manager Horatio Skeete, center, and Safford City Councilor Michael Andazola Sr. at the League of Arizona Cities and Towns in 2019. On Monday, Cassella was named as Skeete’s replacement and will be the next Safford City Manager.

SAFFORD – After one year as the Safford Assistant City Manager, John Cassella will now get his shot at running the show.

After a statewide search, Cassella was named as the new Safford City Manager on Monday and will replace Horatio Skeete, who is retiring as of Thursday, June 11. Skeete told the Gila Herald that he will assist in the transition to the new city manager for about a month after his retirement.

Cassella was hired in June 2019 to fill the newly created position of assistant city manager and began in July 2019. The Safford City Council is expected to formally approve and announce his hiring at an upcoming regularly-scheduled meeting. The topic is on its Monday, June 8 meeting as an executive session item since it involves a staffing situation.

Cassella has more than 21 years’ experience in city government, including eight in both Sierra Vista and Goodyear, where he handled the city’s budget, and performed financial modeling and revenue projections, respectively.

Cassella was one of four finalists for the position.