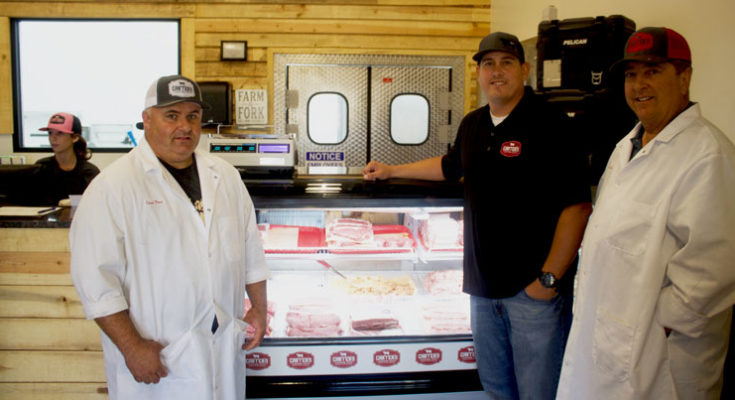 THATCHER – For those interested in farm to table products, or, as they put it, pasture to plate freshness, the wait is over for a local option.

After 20 years of dreaming and more than two years in the works, Carter’s Custom Cuts opened its retail doors Friday, Sept. 14, to the delight of meat lovers throughout the Gila Valley.

The business is owned by Dr. Bart J. Carter and his son, Bryce Carter, who also operates the business with his butcher, Chad Pena. While Dr. Carter is a surgeon, the precision cuts of beef and pork are done by Pena, who is right at home wielding a variety of sharpened implements.

Dr. Carter said he had been hoping to have such a facility for a very long time and that it meets a great local need.

“For many years, we have sold animals out of our feedlot area and we would have to take them to Willcox or to Kansas Settlement to be processed and it was just a giant pain,” Dr. Carter said. “It was a full day’s deal by the time you loaded the animal, hauled them over there and came home. And then you would have to go back and get the meat two or three weeks later and bring it back frozen and distribute it.”

With the new business, the Carters now only have to move the cattle from their feedlot up the road to the harvesting room, where the animal is led into a holding area and then instantly and humanely euthanized.

The hide is then removed, and the animal is split into two pieces by a large saw. The whole process is observed by state inspectors, who then issue their stamp of approval on each carcass. The animals are then hung in the cooler until Pena butchers them, creating the fresh cuts of meat for sale to the public.

Located just off Reay Lane on a freshly paved W. Frye Mesa Road, Carter’s custom Cuts is open Monday – Friday from 1 – 6 p.m. and on Saturdays from 10 a.m. – 2 p.m. When the Gila Herald toured the facility Saturday, the business had a steady stream of retail customers even though it had barely opened the previous day.

“It’s great,” customer Rusty Layton said. “Everything good about it needs to be said.”

The facility operates on a three-prong business model that includes the custom harvesting of farm animals for those who raise them, harvesting wild game for hunters, and as a retail butcher shop utilizing the Carters’ own farm animals.

The Carters have a 150-head Brangus cattle ranch east of Safford, which they then raise at their feedlot in Thatcher just up the road from the business. The cattle are 5/8 Angus and 3/8 Brahman, and they also have what they call “Ultra Blacks”, which are 3/4 Angus and 1/4 Brahman. The “Brangus” hybrids first came into existence in the 1930s to create a drought-resistant and heat-tolerant animal with the same Angus attributes that could be raised in the southwest United States.

“The animals that we sell out of this retail store are registered purebred Brahman-influenced Angus cattle,” Dr. Carter said.”(It is) definitely a high-quality, tender meat source. When you eat Brangus beef, you’ll notice a difference. This fresh meat is just a different product. That’s what we’re selling.”

The steers are between 18 and 30 months old when they are harvested. Once euthanized, they are hung for 10 to 28 days prior to being butchered. Dr. Bryce said Pena can butcher about one beef per day to present for retail sale. Most of the cuts of beef are boneless, except for bone-in ribeye, because they like to say they sell the meat by the pound and why should people pay for bones.

In addition to the beef, the retail store also sells pork products as well.

The state-of-the-art facility features separate coolers for game animals and farm animals and boasts a harvesting facility second to none in the area.

Each time after an animal is harvested, the room must be hosed down top to bottom using a cleanser and degreaser and is sanitized. During the Gila Herald’s visit, the harvesting room was exceptionally clean and had no odor at all.

“This (harvesting) room is cleaner than my operating room,” Dr. Carter said. “There, the walls get wiped down but here the walls are hosed down and sanitized after every use.”

Carter’s Custom Cuts is a family-run business with seven employees, including Aubrey Pena working the counter with Lucy Carter, Dr. Carter’s granddaughter. When asked if she ever gets to take some of the cuts of meat home with her, Lucy Carter advised, “If I pay for it.”

Aubrey said she enjoys her role at the shop.

“It’s a lot of fun,” she said. “It’s neat to see people’s interest in this kind of business in the community.”

The retail shop also has a variety of products to help customers season their meat and cook it and sells Green Mountain Grills and specialty pellets and Pelican coolers as well as store-branded merchandise.

Dr. Carter said while they hope the venture will be successful enough to support the staff, he realizes they won’t be able to undercut meat prices at the large retail outlets.

“We will never compete with Safeway and Walmart and Thrifty, that’s not our goal,” Dr. Carter said. “Our goal is to produce high-quality, specialty meat.”

So, if you would like to try some of the fresh, custom cuts of beef and pork or have an animal of your own that you would like to be harvested, head on over to Carter’s Custom Cuts at 4155 W. Frye Mesa Road, just west of the intersection with Reay Lane, or give them a call at 428-0556 to schedule a harvesting.