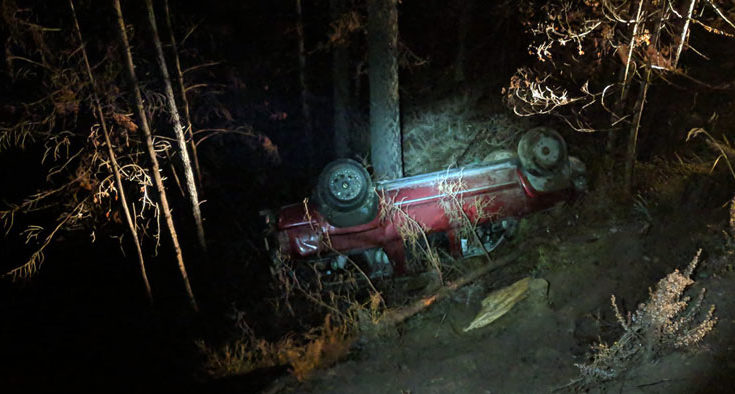 Photo By Clay Mayhew: This maroon Chevy rolled down the side of Mount Graham after the driver went off the side of the road. The occupants were all wearing their seatbelts and escaped basically injury-free.

MOUNT GRAHAM – Four people survived a harrowing experience as their vehicle rolled off the road on Mount Graham on Sunday night and tumbled roughly 25 feet down a hillside. The occupants, including one woman who is 35 weeks pregnant, were all wearing their seatbelts and survived the ordeal with no more than a bump.

Mount Graham has several dangerous curves that are not protected by guardrails and if a vehicle slides over them it could be a fatal mistake.

According to a Graham County Sheriff’s Office report, just before 9 p.m. on Sunday, Oct. 21, a maroon, 2003 Chevy station wagon driven by Daniel McCargish, 20, of Clifton, slid off the dirt portion of State Route 366 (Swift Trail) just above the Shannon Campground. McCargish and his three passengers all said they were traveling westbound between 25 to 35 mph on the dirt road when McCargish lost control of the vehicle. McCargish said the car “fishtailed” as he went around the corner and that he overcorrected and rolled off the hill.

The car came to rest roughly 20 to 25 feet below the road and was eventually recovered by Magnum Towing.

The pregnant woman was transported to Mt. Graham Regional Medical Center by paramedics with Lifeline Ambulance but had advised that she wasn’t injured except for a golf-ball sized bump on her forehead. The deputy followed up at the hospital and reported the woman was fine but and was having contractions. None of the other occupants reported any injuries.

The deputy noted the roadway was slightly wet due to some sprinkling at the time of the crash and that he couldn’t locate any skid marks due to the rain on the dirt road.

McCargish was given a citation for failure to control his vehicle to avoid a collision.