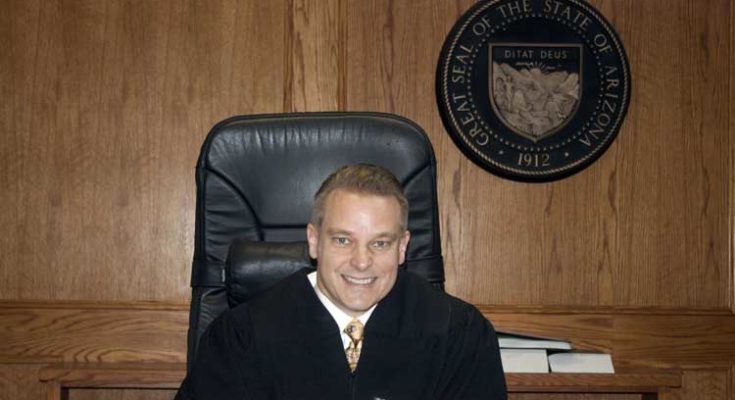 Judge Peterson back on the bench

SAFFORD – If one had to use one word to describe Graham County Superior Court Judge Michael D. Peterson, determination would be a good answer.

Only weeks after undergoing a splenectomy (removal of the spleen) Judge Peterson returned to the bench Monday morning. Peterson was diagnosed with non-Hodgkin’s lymphoma, which is a cancer of the lymphatic system, which is part of a person’s immune system and helps fight infections and diseases and helps fluids move through the body.

Peterson said he wanted to keep the public informed of his health status and that rumors of his pending demise were premature.

“I owe it to the people of our county for them to know,” Peterson said. “They deserve to know.”

After going to an annual check-up for Graham County employees in late May, doctors noticed cancer while performing an ultrasound on Peterson’s organs.

“I was fortunate that I did that because I would not have known and I could have still been having this happen and not be cognizant it’s cancer, so, thankfully, I did that,” he said.

Peterson had his spleen removed June 18 and suffered a slight setback when he had to return to the hospital for a few days after developing an infection. The spleen makes immune system cells and stores healthy blood cells while filtering out damaged blood cells, bacteria, and cell waste. Without a spleen, Judge Peterson said he will have to receive an annual vaccination to assist his immune system.

The operation was a success and doctors removed a large cancerous tumor along with the spleen, which made up about 90 percent of the cancer he had. He advised that the survival rate for his type of cancer for his age and health situation is quite good and that he expects to live a long and fruitful life.

While he returned to court Monday, Peterson will have six months of specifically tailored chemotherapy to wipe out the “roots” of cancer throughout his lymphatic system. His therapy will take place mid-week, so he can continue to serve the county on the bench during the early week when the court calendar is full of cases. He told the Gila Herald he will have a session once a week for three weeks and then have a week off. The procedure will be repeated for a total of 18 sessions over the six-month period.

“I expect to work several days a week,” Peterson said.

“I have a garden variety form of non-Hodgkin’s lymphoma, which means I have a good chance of the chemo working on the cancer. I only have a small amount of cancer remaining. It’s like roots of a weed that if you don’t pull those weeds when they are little they’re just going to keep getting bigger and bigger. So, at some point they will access themselves in other parts of my body, so that’s why I have to get the chemo to kill that before it gets any bigger.”

Ironically, leading up to the discovery he had cancer, Judge Peterson had been doubling down on creating a healthier lifestyle for himself. While he already used his lunch hour to get in a frequent workout, he said he began to watch his diet closer and cut down on sugary drinks such as soda. He said he would now increase that effort.

“It’s now my responsibility to be an intelligent survivor of cancer to live a good lifestyle and make good lifestyle choices to give myself the greatest probability of success of having a cancer-free lifestyle going forward,” he said.

Leading up to his surgery, Peterson was still presiding over the court as much as he could, including conducting hearings telephonically from the hospital. Graham County Judge Pro Tem Travis R. Ragland, retired Graham County Judge Pro Tem D. Corey Sanders, and Greenlee County Superior Court Judge Monica L. Stauffer stepped up and helped to keep the routine calendar moving forward while Peterson kept presiding over some cases in which he was well versed on the nuances and switching judges would have been problematic.

“Words can’t describe how much I appreciate judges Ragland, Stauffer, and Sanders for helping out in this time,” Peterson said. “I think they’ve done an excellent job.”

Peterson said he was pleased with the expertise of his doctors and that the whole experience has actually been positive in a sort of fashion since he has a newfound appreciation for his family and the natural world around him.

“My relationship with God is stronger than it has ever been,” Peterson said. “My relationship with my family is stronger than it has ever been. There’s a lot of emotions when you are told that you have cancer . . . I have come to cherish every day that I’m alive more. I see simple little things – I took a walk with my wife the other day and there was a butterfly that kept perching itself on this flower. It sounds silly, but I really appreciated that and I would never have even taken a moment to think of it before.”

“I believe in the long run I will look at this as a great blessing.”

Judge Peterson is running unopposed for re-election in the Aug. 28 primary.