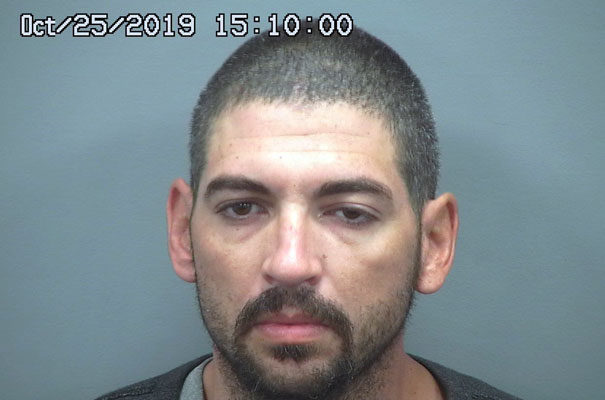 Contributed Photo/Courtesy GCSO: William Duane Butler continues to rack up charges against him.

SAFFORD – October wasn’t so good for William Duane Butler, 33, and November isn’t starting out that great either. Butler went through a slew of charges in October and now he is believed to have committed a hit-and-run in the Walmart parking lot.

After being charged with driving on a suspended license in October (a charge he has multiple citations for in recent history) Butler skated on an arrest warrant that hadn’t been filed yet. He was then apprehended two days later after allegedly engaging in a scuffle with a landlord and damaging property while nearly striking the victim with his car. In that case, he has been charged with criminal damage, assault, and intentionally placing a person in fear of imminent physical danger.

However, after being booked on the assault charge case, he was released from jail mere minutes prior to a warrant for failing to show up to court on a shoplifting charge went live through the Graham County Adult Detention Facility’s system.

On Tuesday, Nov. 5, while still technically wanted on a warrant for missing court, Butler was reportedly involved in a hit-and-run at Walmart.

An officer was dispatched at about 4:14 p.m. to the store at 755 S. 20th Ave. and the reporting party gave a description of the car that struck the victim’s automobile.

The car was soon located abandoned in the 400 block of 9th Street. Another officer was dispatched to complete a vehicle removal of the car while the initial officer went back to Walmart to speak with the victim.

Shortly after the initial officer left, Butler arrived at the scene and allegedly admitted to driving the car and said he didn’t stop after hitting the other car in the parking lot because “some lady was yelling at him and he just wanted to leave”, according to the police report.

Butler was charged with leaving the scene of an accident and driving on a suspended license and his vehicle was towed for a 30-day impound. He appeared in court on Tuesday, Nov. 12, and his warrant was quashed and $500 bond voided.

However,  according to online court records, he is delinquent in paying his fines for a charge of possession of drug paraphernalia he pleaded guilty to in September and a criminal case delinquent contract notice was generated Wednesday, Nov. 13.