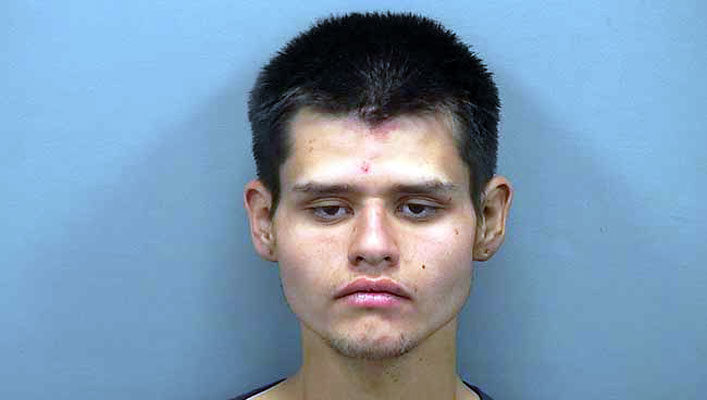 Contributed Photo/Courtesy GCSO: Michael Holloway was arrested and booked into the jail on burglary and drug charges.

SAFFORD – A man who had been hallucinating earlier in the day was apprehended by force Sunday, April 14, after he allegedly entered a truck in the locked Western Refining yard at 1010 E. U.S. Highway 70.

Michael Holloway, 21, was arrested and booked into the Graham County Adult Detention Facility on charges of burglary in the third degree, possession of a dangerous drug, possession of drug paraphernalia, and promoting prison contraband.

Officers were dispatched to the Western Refining yard at about 2:46 p.m. after an employee noticed Holloway in the locked yard enter his truck.

An employee assisted an officer to enter the yard and pointed out where Holloway was near a building on the east side.

The officer reported using parked semi-trucks as cover to get close to Holloway and then ordered him to drop what appeared to be a syringe. The officer advised that Holloway instead put his hands where the officer couldn’t see them and the officer informed Holloway that he would deploy his TASER if he didn’t get to the ground and show his hands.

However, Holloway still wouldn’t follow commands and the officer struggled with him as Holloway allegedly resisted being handcuffed. The syringe was later found nearby.

Holloway was then transported to the Mt. Graham Regional Medical Center, where he was treated and medically cleared for incarceration.

While at the hospital, the officer questioned Holloway about the incident and asked if he remembered officers being called to assist him earlier in the day when he was outside Sunrise Village Mobile Home & RV Resort and thought the cars were watching him. Holloway replied that he didn’t know anything about the burglary charge, syringe, or the incident earlier in the day. He was then taken to jail.

While going through the jail’s intake process, a baggie of meth and a syringe without a cap were found in Holloway’s shoe, thusly adding charges of possession of a dangerous drug, another paraphernalia charge and promoting prison contraband on top of the burglary and paraphernalia charges.