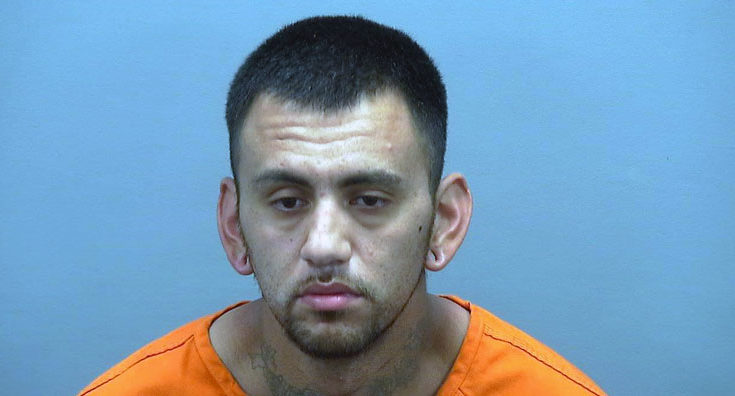 Contributed Photo/Courtesy GCSO: Jordan Saiz, 28, was arrested for burglary and trafficking in stolen property after being accused of stealing from his friend’s house while the occupants were away on vacation.

Items stolen from residence while occupants were on vacation recovered

GRAHAM COUNTY – Jordan Ray Saiz, 28, was arrested and booked into the Graham County Adult Detention Facility on Tuesday, April 16, after being found in possession of items stolen from a county residence. Saiz was charged with burglary in the second degree and trafficking in stolen property, with additional possible charges of possession of a dangerous drug and possession of drug paraphernalia pending.

A deputy was initially dispatched Monday, April 15, at about 8:33 p.m. to a residence off W. Cactus Street regarding a burglary. The victims said they had gone out of town on vacation a few days before and when they returned that night they discovered their home had been broken into and burglarized. Additionally, a storage shed on the property was also broken into and items were taken from there as well.

At that time, the deputy was able to lift a suspicious fingerprint and send it to a lab for testing, but there were no suspects in the case.

The following day, one of the victims had tracked down his stolen Galaxy S9 cell phone to the Twin Palms Trailer Park in the 3600 block of Main Street and realized his friend, Jordan Saiz, lived in the park and had known he was going to be out of town. The victim confronted Saiz and advised he was going to call the police. Saiz then produced the victim’s stolen 48-inch LG flat-screen television from his trailer and gave it back to the victim, who then alerted the police.

Sheriff’s deputies were joined at the trailer park by a Thatcher officer and Saiz was contacted. At that time, Saiz advised he had purchased the TV for $150 from “some guy” who came to his house. Saiz allowed a deputy to enter his residence and numerous other stolen items were recovered, including a PSE compound bow, Alpine amplifier, and green, 1800-watt Ryobi generator.

Saiz still claimed he had purchased the items and was then arrested and taken into custody for the burglary.

After receiving a warrant to search Saiz’s residence, authorities discovered drug paraphernalia including two glass pipes with methamphetamine residue and a red digital scale as well as a “chunk” of meth in a baggie. Several other items that were reported stolen from the victims’ residence, including a Vivitar drone, black phone case, and a trail camera, were also located, photographed and returned to the victims.

Saiz was taken to an interview room but refused to even acknowledge the investigators had his name right without an attorney present. The interview was then closed and Saiz was booked into the jail for burglary and trafficking in stolen property with possible additional charges to follow.