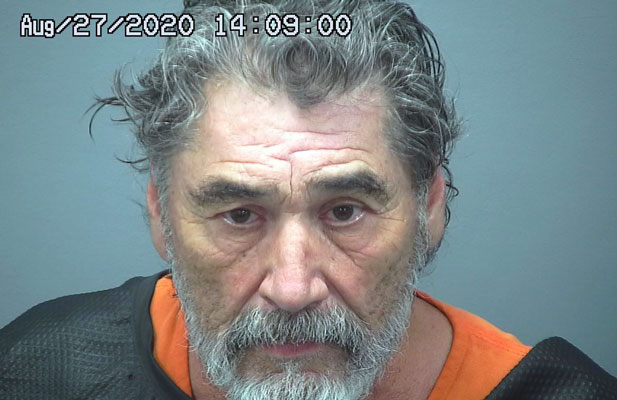 Contributed Photo/Courtesy GCSO: Manuel Chacon, 65, was arrested and booked into the jail for burglary in the first degree, aggravated assault, theft of a firearm, robbery, and trafficking in stolen property.

SAFFORD – An elderly, wheelchair-bound man hired a man to help him with yard maintenance, but instead the man beat him, stole his gun, and pawned it.

On Aug. 25, the victim called police and told him he had been beaten and robbed.

The victim said he needed assistance pulling weeds around his house, so he hired a man named “Manny” to do the job and paid him $40. Manny was later identified as Manuel Chacon, 65, of Safford.

Instead of pulling the weeds, however, Chacon didn’t show up on the day he was supposed to work. When Chacon showed up a few days later – pounding on the victim’s door. The man said Chacon forced his way into the residence and an argument ensued.

During the verbal confrontation, the victim felt threatened, so he advised he rolled his wheelchair toward where he keeps his firearm – a .380 semiautomatic Remington pistol.

However, Chacon beat him to it and took his gun. The victim said Chacon then started punching him in his head and chest and didn’t relent until Chacon’s girlfriend came in and yelled at him to stop. A couple of days after the initial report, the victim showed the officer the dark bruising left on his chest by Chacon’s strikes.

Chacon allegedly told the victim he was going to “borrow” the gun for a few hours and then bring it back. However, according to video surveillance at the Firing Pin Gun & Pawn, Chacon pawned the gun at the store the same day for $75. An officer investigated at the pawnshop on Aug. 26 and found the pawned gun had the same serial number as the one stolen from the victim. The pawnshop provided a receipt that had Chacon’s driver’s license and a fingerprint. The pawnshop owner requested to be a victim since Chacon was paid $75 for the gun, which was confiscated by the police to give back to the robbery victim.

An officer attempted to contact Chacon on Aug. 27 at his residence at the Mountain View Terrace Apartments on Pepper Tree Drive, however, nobody answered the door. The officer left his card, and shortly thereafter a woman who identified herself as Chacon’s girlfriend called him and asked him what he wanted. The woman said Chacon was working at a friend’s house and provided a phone number where he could be reached.

The officer called the number and spoke to Chacon, who claimed he took the gun out of self-defense. He said the victim threatened to kill him and his girlfriend, so he took the gun and pawned it. Chacon also allegedly advised that he didn’t call the police after supposedly being threatened because he is self-sufficient. However, Chacon said he would meet with the officer later.

Several minutes after the conversation ended with Chacon, the woman called the officer and said the man in the wheelchair pulled the gun on Chacon because he felt Chacon had stolen his $40 for not doing the yard work. She said she took the gun from the man because she is a former Marine and it wasn’t right for him to pull the gun on them over $40. The woman declined to speak to the officer in person and admitted to being intoxicated. She also claimed she was the one who pawned the gun.

Later that same day, the officer was southbound on 20th Avenue near the intersection of Relation Street when he noticed Chacon’s truck traveling northbound. The officer initiated a traffic stop and located Chacon and his girlfriend in the truck.

At that time, the girlfriend advised that Chacon took the gun from the victim and she took it from Chacon. She said Chacon punched the victim in the chest until she stepped in and that it was Chacon’s idea to pawn the gun. When asked why she hadn’t called the police if the victim pulled a gun on them, she said she is a Native American from South Dakota and they don’t have a good relationship with the police. The officer noted that the woman was too intoxicated to take control of the truck, so the vehicle was towed from the scene and the woman was given a ride home.

Chacon, who also appeared intoxicated, was arrested for burglary in the first degree, aggravated assault, theft of a firearm, robbery, and trafficking in stolen property.

While being booked into the Graham County Adult Detention Facility, Chacon blew a breath/alcohol percentage of .197.