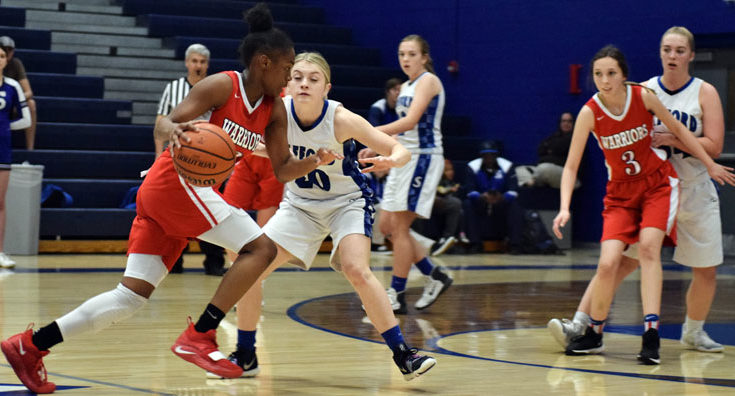 Raymundo Frasquillo Photo/Gila Herald: Safford junior Brinley Kempton defends against an easy first-half path to the basket by visiting Miracle Brown-Jeter on Feb. 12. Safford prevailed 58-29 and heads to Ganado for a second round pairing with No. 8 Chinle on Friday, Feb. 15.

SAFFORD – The Robert Abalos-coached basketball girls walked off the court in Norma Bellamy Gymnasium with smiles on their faces Tuesday night as Safford ousted No. 24 San Tan Valley American Leadership – Ironwood 58-29 during the state tourney round one.

Safford started two seniors, a junior and two sophomores against three juniors and two sophomores. The skill level was noticeably different, and the Bulldogs had little trouble dispatching the visiting Warriors. American Leadership trailed by 25 points, 33-8, before reaching double figures on a field goal with 1:39 left in the first half.

The home girls scored in double digits in three of four periods, while the red-clad visitors did the opposite. Safford led 19-6 following the opening period, 35-10 at halftime, and 54-16 heading into the fourth period. Bulldog reserves played the entire final period. Safford’s starters had 45 points and reserves 13.

“I wanted to get state playoff experience for them,” Abalos said. “That way they’d get the jitters out of the way.”

The No. 9 Bulldogs head to the Navajo Nation for a second round pairing with No. 8 Chinle at Ganado on Friday, Feb. 15, starting at 6:30 p.m.

In the 2A Girls State Play-In Tournament, the Pima Roughriders came back from down nine at halftime at Desert Christian and actually led after three periods. However, the Eagles prevailed in overtime, 62-61, ending Pima’s season.