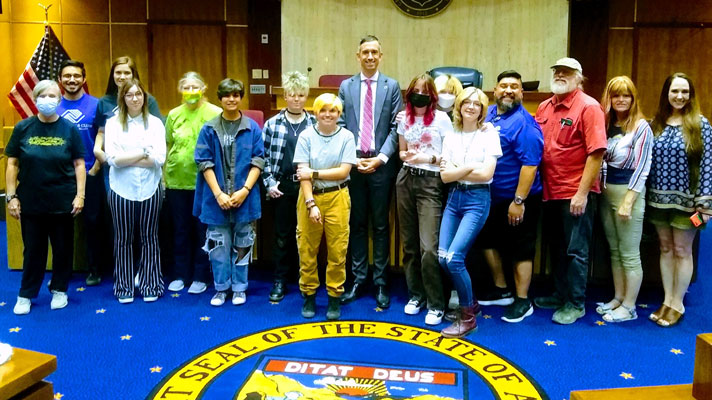 PHOENIX – A group of Greenlee and Graham Democrats as well as members of the Girls & Boys Club of the Gila Valley and Teen Democrats of Safford were treated to a tour of the Arizona State Capitol in Phoenix on Monday, May 23.

The tour was hosted by Representative Daniel Hernandez, who is running for Congress in the new Congressional District 6. The visitors enjoyed a rare visit to the “underground tunnel”, originally built as a bomb shelter in the early 60s, which connects the Senate and House.

As the House was not in session on this day, the visitors also had the opportunity to engage in a mock debate on the House floor. The activity involved the designation of a young “Speaker of the House” to introduce a fake bill whose merits were then debated by two different assigned teams on either side of the aisle.

On the Senate side of the Capitol, members were in session. This afforded Senator and Arizona State Democratic Party Chair Raquel Teran the opportunity to publicly welcome and introduce the out-of-town visitors, who were seated in the balcony, to the Senate. Following this, the visitors witnessed in person a real debate between Republican and Democratic state senators regarding the security for drop boxes used in elections.

Nick Tellez, President of the Boys and Girls Club and Chair of the Graham County Democratic Party, said the visit was so much fun and so educational he was hoping to have another group visit in the Fall. He added that he was very grateful to Rep. Hernandez for hosting the event.

Susan Breen, Chair of the Greenlee County Democrats, confessed that the day’s activities were far more exciting and informational than she thought they would be. She said she was struck by the solemnity and protocol involved in being in the Capitol.