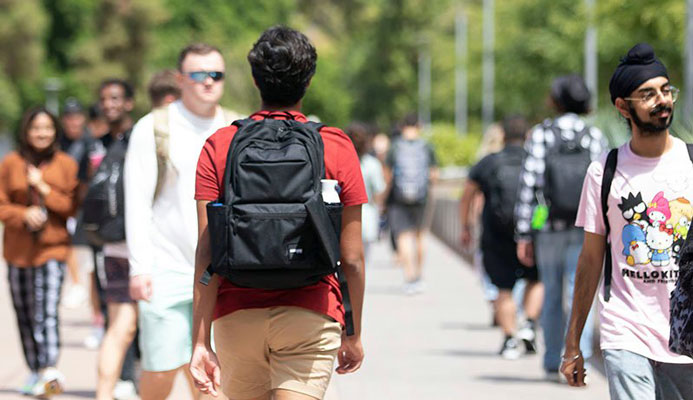 Photo by Sophie Oppfelt/Cronkite News: Students walk across the Arizona State University campus in Tempe on Aug. 24, 2022. A new Biden administration plan would forgive up to $10,000 in student loan debt for people making up to $75,000, a plan that conservatives say goes too far and progressives say does not go far enough.

WASHINGTON – There are nearly 900,000 Arizonans who could benefit from the Biden administration’s plan for student debt forgiveness – and almost as many opinions about whether or not the plan is worthwhile.

The main aspect of the plan unveiled last week by President Joe Biden is a proposal to cancel up to $10,000 in debt for people making less than $125,000, and up to $20,000 in debt for low-income Pell Grant recipients.

It aims to fulfill a Biden campaign promise but does not go far enough for some progressives, who were treating the announcement as a welcome first step toward broader relief.

Rep. Raul Grijalva, D-Tucson, said the plan shows Biden’s “commitment to the working class, people of color, and struggling families who have been straddled with crippling debt by an unfair and inequitable higher education system.” But he said the president needs to do more.

“Many working-class and people of color took out tens of thousands in loans for their opportunity to attain the American dream,” Grijalva said in a statement after Wednesday’s announcement. “We should not penalize them, hold them back and further widen the wealth gap because of their success.”

The Biden administration estimates that as many as 43 million Americans – holding about $1.6 trillion in student debt – could benefit from the debt-relief plan.

“An entire generation is now saddled with unsustainable debt in exchange for an attempt, at least, at a college degree,” Biden said as he announced the plan.

In Arizona, about 887,100 people, or 12.4% of state residents, have student debt, according to data from the Education Data Initiative, which said the average student loan debt in the state is $35,396.

Cesar Aguilar, executive director of the Arizona Students Association, said a good chunk of his salary went toward student loan payments after he graduated from Northern Arizona University in 2016.

Even though the Biden plan is not as much as his organization had hoped for, Aguilar said it will make “a huge difference for a lot of those individuals” who are in the same situation now that he was in right after school.

The White House plan would forgive up to $10,000 in student loans issued by the Department of Education, for people making up to $125,000 – or $250,000 for households. Recipients of Pell Grants, which go toward lower-income students, could see up to $20,000 of their loans canceled.

The plan lowers limits on how much of a borrower’s income goes to debt payments. Currently, debt-holders do not have to pay more than 10% of their disposable income per month on their loans. That would be lowered to 5%, and debt could be canceled after 10 years, instead of the current 20, for those who brought their debt under $12,000.

Finally, a payment holiday that was set to expire on Aug. 31 was extended by Biden until Dec. 31. It was the fifth such extension by his administration, and Biden insisted that it would be the last.

The Education Department said it expects to have applications for debt relief available online by early October.

Biden said the plan would “build wealth” by letting debt-holders buy homes, start businesses and invest for retirement with money that would otherwise go to loan payments. The White House stressed the income limits were designed to steer relief to lower- and middle-class workers, claiming that almost 90% of debt cancellation would go toward those making less than $75,000.

But a Penn Wharton School of Business analysis of the plan estimated that beneficiaries would be a little better off, with about 75% of the benefit going to people making up to $88,000. It said the plan will cost about $605 billion as currently structured, but the price tag could exceed $1 trillion if there are changes to the income-driven repayment rules or other factors.

Andrew Lautz, director of federal policy for the National Taxpayers Union Foundation, said the proposal will reduce federal income by erasing some student debt, but that it does not include new taxes to offset those cuts.

Aguilar said it will be money well spent, which is why organizations like his are pushing for full debt relief.

“The reason why we were asking for that is because we want the United States to prioritize education,” he said. “We know that the investment return on education is enormous. You transform communities, you transform families, you send people – low-income individuals – into the middle class.”

To those who argue that the government should not be spending the money, he pointed to tax breaks for “corporations and … rich individuals. But we never see money coming back to actual working and middle-class folks.”

“We understand students and people who are saying it wasn’t enough. And we’re not, we’re not stopping there, we’re continuing this fight,” Aguilar said.