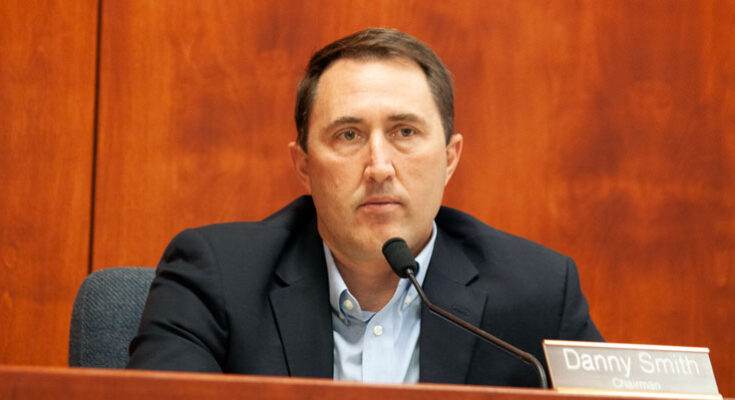 Jon Johnson Photo/Gila Herald: Chairman Danny Smith and the rest of the BOS voted unanimously to utilize a $252,052 grant from CDBG funds to build a homeless respite shelter.

SAFFORD – After more than an hour of deliberation and input from the public, the Graham County Board of Supervisors unanimously voted Monday morning to allocate its Community Development Block Grant (CDBG) from the Southeastern Arizona Governments Organization (SEAGO) to the construction and running of a homeless respite shelter.

This year’s CDBG grant, which rotates yearly between Safford, Thatcher, Pima, and Graham County, is for $252,052, according to County Manager Dustin Welker. When speaking about possible funding for the respite shelter, Welker estimated the cost to be roughly $400,000 and said that included the possibility of having to purchase land and build a facility.

The proposed respite facility will only be open during the daytime and will provide a place for people to get out of the elements and be able to take a shower and wash their clothes. Faith-based organizations also lauded the proposed facility as something that could help the downtrodden find employment. The facility would be somewhere they could safely store their belongings while they apply for a job and they would be able to use the site’s address on applications. Details on the size of the shelter and the number of people it will accommodate at one time are still in development.

It appeared to take a strong showing by the Gila Valley Ministerial Association and support from Supervisor Paul David at the BOS’ Monday morning meeting to sway two of the supervisors’ votes. David spoke eloquently and fervently in favor of the respite shelter.

In addition to David’s statements, numerous members of the public  – most of who identify as being involved with the Association – spoke in favor of the shelter and gave just enough encouragement to convince the Board to move forward with their plan for building and running the shelter.

The county had narrowed the grant recipient to three choices: building a homeless respite shelter, renovate the Graham County Fairgrounds, or pave a short piece of dirt road.

The proposed streets project would have provided an engineered, solid surface road over what is currently a dirt road. However, there were only a few qualifying areas and an additional survey would be necessary and the budget would only cover a portion of a street and would need to likely be paired with HURF funds.

Initially, Chairman Danny Smith expressed his support for renovating the Graham County Fairgrounds area and said he was encouraged that they could do both. He said the county was expecting to receive federal money from the Rescue Act – which could roughly be about the same amount – and that money would be better suited to funding the respite shelter.

The proposed park renovation would have replaced 22 drinking fountains (currently only three are operational), replaced the current playground loose rubber surface material with a synthetic tile surface, and improve ADA compliance. The budget for the renovation of about $243,000.

Welker said the county has had issues with mice and rattlesnakes in the current loose rubber surface and that the new tile flooring would eliminate that.

Smith said the fields see “about 9,000 people out there on a weekend that uses the fields and then, during the evenings during Little League, it’s about 7,000 folks that are heavily using that piece of equipment – the park.”

Supervisor John Howard – who coincidentally is on the House of Hope sober living facility board which was funded, in part, by Safford’s CDBG grant – questioned the feasibility of building the facility and then running it with only the grant money. However, proponents gave a “build it and they will come” and said their parishioners and other volunteers will come forth and assist by donating funds.

“In theory, this is a wonderful project,” Howard said. “(But) the amount of money that’s put up here that I see doesn’t even come close to facilitate this facility.”

Howard also questioned the availability of the location for the shelter as he recalled experiencing great difficulty finding an approved location for the sober living facility, and likely having to pass a zoning change.

Grant said the Association already has a location in place that is not on the highway and that it is already zoned C-2, so there would be no new zoning. The property is “not very far away from Firth Park,” Grant said. “It is not around any present buildings or homes and will be an industrial site and close enough to Firth Park that they would want to do that . . . It’s got to be where they already pretty much reside.”

He added that the Association might get the property as a donation and that by renting or selling another property the Association has off Highway 70, it could fund the shelter for the county’s required five years through that alone. He added that the director could be supported by a mixture of volunteers and employees and said two current homeless people could easily become employees.

“We do believe we have the financial capability to do that for at least five years, and that’s without applying for any grants or anything along that line,” Grant said.

He said the building will be considerably different from the House of Hope and that it would be a “simple building” made out of metal with concrete floors and cost between $70 – $100 per square foot without asking for any help from the community. He said the most expensive part to possibly be the bathrooms, which will have stainless steel amenities to deter vandalism.

Grant said he spoke with Safford Chief of Police Glen Orr and said that having a shelter for the homeless to go to other than Firth Park was a welcome notion. He said the place will be a great spot to lift up and help individuals and that while some may not utilize it that it will be worth it even if there are only a few users. With the proposed location being in the city of Safford, Welker said he believes the city and county need to work together on the project and would like to see Safford officially “come to the table” as partners to get it done.

“There’s no question, it’s a much bigger, harder project than the fairgrounds,” Grant said. “And it will require some more maintenance. It will require some more help and volunteers – no question. But we would love to be considered – basically – just to be started. Where it goes from there I don’t know. It will be up to the community from there and what we want to do.”

Former Safford City Council member Chris Taylor said he learned about the agenda item from a Facebook post the night before by Supervisor David. Taylor spoke “on behalf of the least fortunate, most vulnerable, and most often stigmatized population of the Gila Valley. I’m speaking, of course, of those individuals who tragically suffer from the disease of addiction, chronic mental health problems, and unfathomable – to me at least – the ever-increasing homeless population with includes a staggering amount of homeless veterans.”

Taylor said the reality of homelessness is much more complex than usually thought of and that there are many more homeless people who aren’t easily seen. He added that some have become homeless due to “crippling medical bills” and that most people live paycheck-to-paycheck.

“Most of us are only one, maybe two poor choices, a bad accident, a slip of faith, (or) an economy-crippling pandemic away from in the desperate need of the very services that would be provided at a respite center,” Taylor said.

He said a respite shelter would also be the perfect place to track down homeless individuals and help them “learn to fish” by assisting them better themselves.

Smith said he didn’t realize there was an organization willing to take on the homeless shelter. He said the county doesn’t do things that don’t have an ongoing funding source but if the Association will operate it without looking at the county for ongoing funding he could accept that. By the end of the discussion, Smith said he was determined to fund both the respite shelter and park renovation.

Former businesswoman and local author Tammy Mahew said while she was in favor of the project, she had questions regarding multiple unknowns since the funding to operate it is not in place.

“It’s a nice, kind of vague thing to have out what you want to do but there are real costs in this,” Mayhew said.

Pastor David Lee Hakes of the Safford Seventh-day Adventist Church said he has numerous donors ready to assist with the running of the facility and that if the county builds it the funding to run it will come.

Supervisor David then spoke about the danger of waiting on Rescue Act funds and move forward with using the CDBG money for the respite shelter. He said he would also help with getting funding for the park’s renovation.

Shortly afterward, Supervisor David made a motion to use the CDBG funds for the respite center and Chairman Smith seconded the motion. Supervisor Howard then made it a unanimous vote.

See more about the Gila Valley Ministerial Association on its Facebook page.